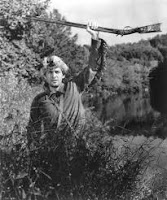 The rise and fall of the West: The eastern conservative establishment will divide America and possibly destroy America.

Our first post-war journey was west, busting through the Smokies with Davy Crockett on his way to the Alamo to help out Jim Bowie. Politics and demographics brought us there as well as Americans crossed the plains and Appalachian hills to Texas and the west. Our best and most important presidents since post-war were westerners: Eisenhower, Nixon, Reagan, Bush I and Bush II but now we face a collapse of the western awakening as the northeastern establishment conspires to take it back. Rick Perry is a real full blood prince of the desert and that is perhaps what is freaking them out.

Maybe it is already too late. If you look at that row of western presidents, it makes progress from Eisenhower (born in Denison, Texas and raised in Kansas) to Reagan. But it climbs the mountain and then turns around. History is in the details and the telling detail in this passage was when George H.W. Bush tried to convince the world that he was really a Texan. Most felt he was a Connecticut Yankee absurdly decked out in cowboy boots. Worse with W., torn between East and West, and as much as he loathed the eastern prep school and longed for the prairie in office, the western clarity of purpose found in Eisenhower, Nixon and Reagan was fully absent in his office. And with the current yearning for Jeb, who has entirely moved back east to that sub-tropical suburb of New Jersey, Florida, the arc has fully returned to the Eastern seaboard.

“Wealthy, Influential, Leaning Republican and Pushing a Christie Bid for President” reads the headline on Sept. 26 at The New York Times. “Christie understands what it is like to be a Republican in the Northeast,” said Lynn Krogh, a Republican campaign consultant in New York, adding: “He’s practical. He’s not just a barnburner.”

In my opinion this is a symptom of failure and represents collapse of the western movement that has brought us economic success in the last 60 years. It will drive America to regional division, because the time of continental dominance by the east is well past and has been since the end of World War II. The west will no longer be dominated by New York and New Jersey. We need instead to represent the western paradigm, as represented most holistically by Dwight Eisenhower. Today only Mitt Romney and Rick Perry fill the bill.

But if this western passage is fully subverted by New York “crony capitalists” it will bring trouble not seen in this country in more than a century.
Posted by Bernie Quigley at 6:53 AM