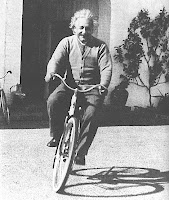 Will Einstein join Marx and Freud now as a god that failed? One of the “three visitors” who came to us at the turning, that is, at the end of the world and the beginning?

Einstein was Monkey God as the century opened to the new creation. His picture today hangs on the classroom walls everywhere where Jesus, Washington or Ganesh once did.

Even Franklin D. Roosevelt borrowed from his cosmic observations and make with them an atom bomb.

Pretty big mistake. Still the picture hangs in the classrooms. But this is characteristic of Monkey Gods – worlds fall before them and new ones awaken. They change the Creation, but have no control over the changes which will occur because of their speculation. Surely Einstein is our own Karma Dorjee, Rimpoche and itinerant ascetic enthroned in mid-air, under whose resting gaze mountains pitched and tossed, buildings shook and cracked, the sun fell like a thunderbolt and another sprang up in its place. Einstein considered himself to be such a disciple, like those from the heights of The Land of Snows.

Or not. Rumor from his niece, had it that he got it all from Madame Blavatsky and her book “The Secret Doctrine” published in 1888, incomprehensible to all but the best mathematicians. “There is no religion higher than truth,” the Russian savant wrote in her introduction.

Which would be an excellent slogan for the European Organization for Nuclear Research (CERN) in Switzerland.

But maybe we were too young for these truths. I interviewed a well known Indian theoretical physicist years back who compared himself to his American counterparts. In India we didn’t come out of the trees until we were 12, he said. And what made India’s physicists different from ours: “We started from God and went to math. You start with math.”

That could be the flaw in the whole century that the CERN found. But something else: This imagination seems kind of dated today. The research is government financed, project oriented, morally compromised at so many levels and third, fourth and fifth generations beyond its creative origins. The imaginative young today look elsewhere for excitement.

I felt I saw the century rising this time in a little discussion overheard on TV of a young scholar talking to Simcha Jacobovici, known to the world as the “Naked Archaeologist.”

With great enthusiasm the young man explained that Bathsheba should be reevaluated. She entered in with David to the “coniunctio,” the cosmic marriage that gave birth to time. Time rose and returns again from her womb via her son, Solomon, moving outward to create the world, and returning again to his temple.

It is not a moral tale; it is the narrative of a time machine which created the human race. Niels Bohr could not have put it so simply when he drew the “tai chi” on the blackboard to explain what he meant about particles and waves.
Posted by Bernie Quigley at 5:23 AM