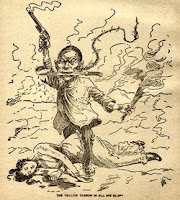 Is China the virus in “Contagion”?

As one review explains it, actor Matt Damon looks on hopelessly when his wife returns from Hong Kong with a virus that will poison the world. Would that be the storied “Yellow Peril”? Not surprising that this movie previewed this past weekend in Venice, scene of Thomas Mann's masterful short novel “Death in Venice” (1911) in which a cholera epidemic in Venice stalks the western soul. Mann's vision in the day of Freud and Nietzsche brought unconscious suggestion of something happening beneath the surface ("Why are they disinfecting the streets of Venice?") as futurism and fascism was beginning to bubble up in Italy and Lenin was brooding in Paris. In that more poetic day visionaries like Maud Gonne were dreaming of rivers flowing with blood.

It would not be far off to see in this movie something beneath our control rising in our time across the Pacific. Something we are helpless to defend against: The rise of China as a world power. What impact would the movie “Contagion” have if the virus came from, say, Norway or Leuchtenberg? It is based on a real threat of the SARS virus invasion when 5000 people were quarantined in Canada in 2003. As my local TV station is CBC out of Montreal, I watched nightly the mastery of control and impending panic on the evening news fueled really by the war on Iraq and a disintegrating global situation. In fact SARS caused little damage.

Another film previewing in Venice, “The Arrival of Wang” presents the Chinese as squid-like aliens from another galaxy. As Dean Napolitano writes in The Wall Street Journal: “The film, directed by Marco and Antonio Manetti (known as the Manetti Bros.), is a modern-day morality tale for Western nations troubled by — and distrustful of — China’s growing economic power and influence in global political matters. . . The film, they said, ‘tries to reflect upon a few moral and ethical questions: How much should we trust our neighbors?’ and ‘What is a prejudice?’”

So much for diversity and globalization. We are going to need some new buzz words. “Red Corner” (1997), featuring Richard Gere, who is an advocate for Tibet, was an aesthetically excellent film which straight forwardly and responsibly questioned China' motives and authority and lacked the insidious racist undertones.

What is endemic today since 9/11 and even before is panic. The sense that things are beyond our control, beyond our reach, beyond our ability to change the outcome. It is the same sense of subliminal disturbance and doom which Mann felt wandering the streets of Venice at Europe’s fin de siècle, exactly one hundred years ago at the pending death of a different world.

Posted by Bernie Quigley at 5:54 AM