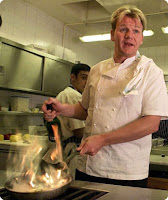 I guess I am the last to catch on but as the rabbis tell you, the gods hide in humble places and I should have looked earlier. Looked to Gordon Ramsay, the chef in the pop TV sensation “Hell’s Kitchen” who returns the life force to America. And not for the first time a fierce Englishman comes to beat us into shape. We call him out. We call him to awaken us. Without him we will die possibly and we call him out in the last breath. As we did Churchill.

I only first caught his act during the breaks in the football game last week, cutting away to other stations during the commercials. Then I sought him out. His genius is best seen and heard on the high channels, presumably in rebroadcast, which contain the profanity, elementary and necessary to the shows truth and anger.

In one episode I caught, chef is riding through the American heartland, trilled and enchanted by the vast and fertile farm that it is. What wonders could be culled from such fullness in a local restaurant. He stops for a basket of fresh apples at a local fresh daily fruit stand and brings it back to the restaurant.

He gives an apple to the local chef and asks, “What is that?” “An apple,” says the rube, nonplussed. “You don’t get it, do you?” says Ramsay. And as per the theme of the show the local chef, the restaurant, the town and the viewing world will be torn to shreds. For chef sees all of creation in the apple.

This is a primal American dream of reawakening, a very positive harbinger to a people in trance, in turmoil – call it troubled or narcotic sleep – in a dormant state of between or bewitchment which really came from great success, but success which came from so long ago its generations and origins are forgotten. But beneath the broken glass and wilted flowers, the fat and the lazy, the self assured, those tenured in crates and tethered to false hope, chef sees a new creation.

Chef is kitchen god, the kitchen the alchemical center of the psyche where the dream of being given again to new creation awakens. Chef Ramsey like Shiva tears it down and burns it, layer upon layer, slaughtering outright the sacred cows – an entrenched chef who loves to put shrimp in chicken for example – which encase and calcify the old ways of thinking and prevent the new being born, prevents the new creation from being unleashed. And under the charred remains and scorched earth, chef alone sees the apple; the new beginning. The beginning again of all creation.

And he offers us the apple.

Posted by Bernie Quigley at 4:58 AM