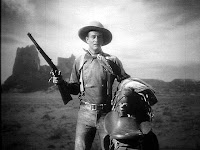 Rick Perry, W. and The Duke

Donnie Osborn v. John Wayne was The Wall Street Journal’s James Taranto's comment on Thursday’s debate. A good one. As The Duke in the original “True Grit” showed himself to be uneasy among strangers and outsiders and preferred the company of his cat and a Chinese merchant. The intuitive Duke was especially out of sorts in the original scenes when the men in black in the courtroom had him pinned like a bug and still squirming. Rooster Cogburn was a man of place, the open range and big sky. He didn't like to be fenced in and sent to court where you had to watch what you said, all dressed up in a monkey suit. And you could sense Perry missed Texas. Like George W. Bush in this regard. W., like Sarah Palin and Perry has a sense of place; a Jeffersonian sense of belonging to one place and it doesn't work everywhere. Elsewhere you feel funny. It doesn't work when you are talking to people you don't know in your heart. And they won't like you. Ask Sarah Palin. Ask W. Both pinned as well.

His recent debate performances, in which he has at times struggled to answer questions or speak clearly in full sentences, have energized his rivals, according to the Washington Post. And Perry has all but conceded that he has not been effective on stage with his rivals, saying at recent campaign stops that the party should pick the best candidate, not the “smoothest debater.”

“Yep, there may be slicker candidates and there may be smoother debaters, but I know what I believe in,” he said Saturday on Mackinac Island, Mich. “And I’m gonna stand on that belief every day. I will guide this country with a deep, deep rudder.”

The Duke couldn’t have said it better. Or Andrew Jackson, for that matter and current criticism brings a startling suggestion of exactly that which Jackson received in 1827.

But Palin with killer warrior skills mastered the outside and the otherworld of politics and made it her own, carving out a center for herself which was stronger than the edges and will likely outweigh them in 2012. Both Perry and Palin belong to the center and so did W. for that matter. And in the much discussed division between the eastern establishment and the west, W. really belongs to the west. The east/west division in his soul makes him uncomfortable. It made him swagger more in the presence of outsiders as President.

One Texas historian says they swagger in Texas because they are insecure. I don't think so. I think it is because they are born free in the desert and don't understand those left behind back east. Time only moves in one direction: west. That's where W.’s problems came in. It tore him in opposition to his eastern family. Like Jeb, who has already moved back east. W. was only half way to Texas; loved Texas and repudiated the east but wasn't full blood like Perry, like The Duke in movie land, like Rooster Coburn. That will take another generation. Those who have never experienced the big sky wouldn't understand.

But pinning them like bugs everybody loses, especially the bug.
Posted by Bernie Quigley at 12:43 PM