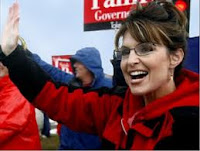 What’s next for Sarah Palin? How about a “super committee” of governors?

What's next for Sarah Palin? She seems at the moment to be finding a role as a general commentator, remarking on Ron Paul's foreign policy and what not. That is, she seems to be at loose ends. There is much more she could do as an Alaskan in terms of advancing regionalism and states as laboratories as Rick Perry talks about it.

Palin’s role these past two years has been much as the La Passionara of the Tea Party movement. Seeing her at the Nashville Tea Party Congress at the beginning showed a connection to this rustic grass roots movement which brought it to large recognition.

But something happened in the interim. Old school professionals like Dick Armey commandeered the rising spirit and it became an unfocused conservative howl, and old fashioned country rant against those effete Washington people.

The Tea Party has lost its original intent. State sovereignty issues as they are maturely discussed by Andrew Napolitano on Freedom Watch and Thomas Woods and Rick Perry and governors like Butch Otter of Idaho and candidates like Alaska’s Joe Miller and advanced by legislators like Delegate Jim LeMunyon of Virginia need some time to percolate. And there couldn’t be a better Petrie dish than Alaska.

A sympathetic president like Perry cannot dictate these changes top down. They have to rise up from the states and governors must take the initiative. And the status of governors must be enhanced. Palin is in the perfect position to bring leadership to this new direction.

Richard Nixon brought forth a model of regionalization of needs and resources that could enable this vision but it was ill conceived culturally and the time was not right. The entire idea in the Jeffersonian view is to advance cohesive American cultures holistically as they mature. George Kennan recognized the need of shifting from global to regional in his last book, “Round the Cragged Hill”:

“I have often diverted myself, and puzzled my friends, by wondering how it would be if our country, while retaining certain of the rudiments of a federal government, were to be decentralized into something like a dozen constituent republics, absorbing not only the powers of the existing states but a considerable part of those of the present federal establishment. I could conceive of something like nine of these republics—let us say, New England; the Middle Atlantic states; the Middle West; the Northwest (from Wisconsin to the Northwest, and down the Pacific coast to central California); the Southwest (including southern California and Hawaii); Texas (by itself); the Old South; Florida (perhaps including Puerto Rico); and Alaska; plus three great self-governing urban regions, those of New York, Chicago, and Los Angeles—a total of twelve constituent entities. To these entities I would accord a larger part of the present federal powers than one might suspect—large enough, in fact, to make most people gasp.”

It has been suggested here that a “super committee” of governors and former governors be formed to consider these issues and build a working framework for discussion and action. I can't think of anyone better than Sarah Palin to form and chair such a group.
Posted by Bernie Quigley at 7:08 AM