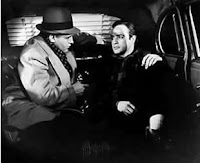 A purely zen way of looking at the Dartmouth debate might be to look at not what was said but why it was said in the first place. And why it was said at Dartmouth with New York commentators in the bucolic New England autumn in black suit and brown shoes and 400 dollar shirts and Charlie Rose. This would be a test on political instinct and action and commitment to principle or a moral ethos, in a countervailing war within the self with the politician’s desire to be included, to be famous, to be, like Terry Malloy, somebody.

Hold into perspective Rose Kennedy’s question when the Kennedys and the Boston Irish had already taken power in Boston and she asked, “When are the nice people going to invite us over?”

The analogous question today: When will Charlie Rose invite us to his circular table?

Gingrich and Rick Perry, like Joe and Jack, correctly understood the discussion on Wednesday night.

Gingrich understands this instinctively. Newt was right when he said 20 years ago that the northeast, like the China Mandarins, still see themselves as running the century when they are irrelevant. All things will pass, even the Lodges and the Kennedys.

But the nice people are back and Charlie Rose holds the Mandarin court. And the desire to be part of the court virtually gushed from Michele Backmann.
Marlon Brando, repudiated the banality of the times when he refused to accept an academy award. Newt could have made a better mark on this debate by his conspicuous absence. As it was, he did well and he did good by lashing out at Rose’s pusillanimous attempt to weaken his command that the money launderers in the Obama administration be thrown in jail. His ratings went up to the double digits. I’ve never liked Gingrich until that moment. Now I like him.

Rick Perry did well in this regard as well. He could easily have brought out an economic package on Wednesday night with some of the otherrs, but bringing it out this afternoon showed a refusal to be marketed, dominated, territorialized, packaged, chewed up and spit out by the Washington Post, by Bloomberg and by Charlie Rose, late of PBS.

But Mitt Romney wins the Rose Kennedy award. Thrilled to be invited in by “the right people” he even made a joke about Rose’s obsequious, milquetoast life as a PBS commentator.

Romney has modeled himself recently as a Tea Party guy, earlier as a Massachusetts liberal and now as Admiral Perry incarnate threatening to whack the Chinese this time with his black ships. And it all seems so staged; every day in every way a life staged from birth to one day be president.
Posted by Bernie Quigley at 5:17 AM