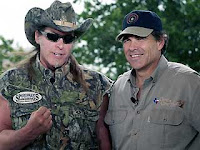 The lesson for the press in the last election should be drawn from Marshall McLuhan’s famous vision that the media are themselves the vehicle and the message. TV’s popular celebrity commentators were gatekeepers to a geist of their own time and generation (their own “kind”); sentries at the portal to tell Sarah Palin that she could not go in. She gave her children funny names. She used a Garfield desk calendar. She shot a moose and ate it. She dressed like a “slutty flight attendant.” She did not belong with them. Rick Perry, naturally leery in this otherworld of imagery and style, will not be likewise taken down. By solstice it will be clear to all that he is an instinctively agreeable and genuine person with a common grace that McLuhan’s winged monkeys cannot exile.

I had an excellent brief conversation with Rick Perry at the Barley House after the NH signing Friday about the astonishing World Series game the night before. It meant something to Texas. Viewership of the World Series jumps way up when the games are between the Yankees and the Red Sox as if some ancient memory drives us. But the great series this year advances my theory that America is finding its “center” now in the middle of the country (St. Louis, say) and leaving the New England families – Kennedy, Bush - behind. It increases the bitterness of us in the northeast; engenders the subtle feeling that we are no longer important. That we are being left behind.

This how I see Rick winning: He needs endorsements of Trump, Palin, Giuliani and South Carolina governor Nikki Haley. Cain, who is really on a self-promotion tour, will fall apart – he has no money and has begun the spiral to cloud cuckoo land. What I have been calling the “establishment” Republicans – Bush/Rove/neocons - will fall apart as well; they crave ideas whose time has long passed and can’t let go – they have become nostalgicos, relying on the reassuring clichés of their Jesuit priest and the quiet confidence that in the end they can still rig something in Florida – they’ll always have Florida. Bush senior, Bob Dole, the WW II wounded. War is over. We won. But the Republican Party today resembles those lost but loyal Japanese officers still hiding in the jungles of Indonesia decades after the armistice.

Since they can’t get Chris Christie in now (and Jeb Bush as VP of course) they will now pour their cash into Romney. But Romney is a shade, a deception, and they will self destruct just as the Eleanor Roosevelt liberals did in the face of Jack Kennedy rising in early 1960s.

The 11% creep factor will ruin Romney & the establishment Republicans. George Will accurately projects this: “Romney, supposedly the Republican most electable next November, is a recidivist reviser of his principles who is not only becoming less electable; he might damage GOP chances of capturing the Senate.” He seems falling apart by the day now; he seems possessed by New Hampshire’s mountain witches. That leaves only Perry standing, steady and sure. With Nikki Haley as VP he beats Obama and empowers the new generation and the rising heartland movement. Long term I look forward to 12 years; Nikki Haley taking on the challenge of Elizabeth Warren in 2020 (Jim Webb as Warren’s VP) with Jon Huntsman as Haley’s own VP.

Going with the contours or time and economy, America is a peaceable kingdom. Otherwise there is breakage.
Posted by Bernie Quigley at 12:43 PM

When you consider the term the term really enjoy, with regards to a close partnership with a further, however as a experience that may be engendered for those who have miltchmonkey a greater association yourself much too ( blank ) or simply as a feeling of more significant unity family members or simply the human race : it gets to be all the more magnificent that each one any one is looking for in your everyday living is enjoy.