Simon Winchester has written a way interesting op-ed today in the NYTs about an obsession to say "White Rabbit" every morning of his life when he woke up for 60 years. Thought it would be worth reprinting my essay on The Matrix and the Magical Animal, a white rabbit, which leads the shaman to his destiny. From Quigley in Exile. Y'all seen the new Lost? From Dostoyevski (The Bros K) to Otis Redding (These Arms of Mine), the Dakini Danielle & Mr. Eko - does anything speak to the millennial condition with such succinct clarity, vision and discrimination? Is like a Saturday movie matinee serial of The Mahabarata. This year is critical - Mr Eko changes from Roman Catholic to New Age Buddhist. A milestone transition between the millenia. Note: Winchester's change of condition might have something to do with his moving from England to Massachusetts. Life changes - John Lennon went from Light to Shadow. (See "Mother," which starts off with Big Ben, as a sad, existential goodby to

The Age of Thomas - from Quigley in Exile 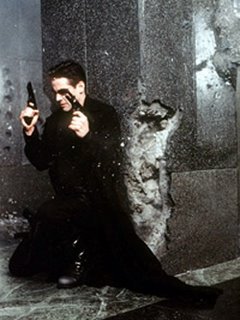 Tiny slips of paper falling from my desk which belongs somewhere but I can’t remember where: . . . Neo presents the vivid picture of the shaman’s journey between millenia. It is a great contemporary shaman’s journey as it returns the shaman back to earth from his space journey. As science fiction went to the heavens in the 1970s, it returns to earth with Neo . . . We are an Earth Species and must find ourselves and our way on this planet . . . To desire to find ourselves in the most distant space is to avoid our fate. In some ways it is a childish illusion of avoidance of adulthood and moral responsibility . . . One of life’s little 3 x 5 cards is the understanding of Hegel as a thesis vs. antithesis coming to a synthesis. But this is a Power Principle view of life – a yang view. The two forces in the world in this view are not yin and yang, but yang plus and yang minus. I always see yin and yang presentations as an erroneous understanding of Hegel. Two men sword fighting is not yin and yang. There is no yin present. Thesis/antithesis is a vision of the world without yin, our world in the West since the 1400s. Most marriages today are yang/yang relationships, each partner with a separate corporate identity outside the body of the other. It makes no difference if they are biologically man and woman. They are friendship relationships - pal relationships. Family as Corporation. Relationships. But that is not marriage, and not yin and yang. The popular book and upcoming movie, The Da Vinci Code on the surface suggests the dynamic Seal of Solomon code – the two interlocking triangles of the Seal of Solomon, but on investigation, there are no yin figures in this entertaining piece of pop mysticism . . . Like most marriages today in Matrix world, all man and woman – everyone in the world perhaps - are yang figures and yang individuals (their nests will always be square). Yin is Andromeda, lost in the ozone, dangling her two Japanese fighting fish at the end of a string. But she’s returning to earth now and here her name is Trinity.

The Matrix presents a mythic picture of the yin world and the yang world and the shaman’s journey from the one to the other. The difficulty in seeing comes from the fact that there are actually four things, not two. There is yin and yang, and each has a Dark Face, yin minus and yang minus. The yang plus and yang minus is brilliantly represented in Thomas Anderson’s journey. Before he Awakens, Keanu Reeves’ character, Thomas Anderson, has dual nature (Thomas means the Twin, specifically the Twin of Jesus and cosmoglomically, we enter perhaps The Age of Thomas, with the second incarnation of the Christ in Aquarius, - each of the Twelve will present as the Christ in a 24,000 Sun Cycle – this is suggested in the third Matrix, but put that aside). Neo’s dual nature is in the 3 x 5 Hegelian vision of anti-thesis and thesis (when someone speaks of the dual nature, ask if she means, man/woman, man/Dark Face, Woman/Dark Face, Man/God-Universe-and Male God [Sky and Fire] or Female God [Earth and Water] – I never know what they mean and think they don’t know). The one, the positive yang, is Thomas Anderson working days as a computer programmer. This is Mr. Anderson in the world. The other is the anti-Anderson, yang minus, working nights as a hacker to negate the work he does in the day. They could well be political parties which see in their sole initiatives contervailing the other. This is thesis and anti-thesis, but they do not form synthesis – they simply endlessly 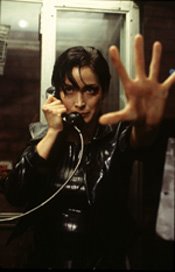 swordfight throughout the ages, the one making the other stronger and visa versa. Mr. Anderson leaves this world and finds another, the yin world. Like all male shamans, he is sent inward by the Triple Goddess (Trinity). Mr. Anderson’s is a classic shaman’s journey and it begins in sleep, where the Universe enters the Unconscious of the living individual. Neo is sleeping. In his dream he hears a voice which says; Wake up Neo, the Matrix has you. The Matrix presents Keanu in the Hegelian dual nature of the current everyday world. It is a woman’s voice from the Unconscious which brings him out. A man’s journey into the yin world always starts with a woman’s voice – it is the female inner nature of a man (and visa versa for women). She lives in the part of consciousness that a man living in Ego/Ego Dark face like Mr. Anderson has never experienced and has no abilities to travel in. The Hegelian 3 x 5 says it does not exist (the common misunderstanding is all important in creating culture. It makes no difference and is of no importance as to what Hegelian actually meant and what is true in Hegel) . . . In life, the most critical moment is the very first – the birth moment. It is then the organism is most likely to fail. Mr. Anderson has to respond to this message without any of the tools he has from his everyday or everynight natures. He has to abandon his skills and tools. He has to find intuition. He has to obey it. This is key to Awakening.

Trinity tells him one thing to do: Follow the White Rabbit. Like Alice and Arguna, like most journeys to the Self, a Magical Animal will lead the way. Suddenly friends appear at the door. He is not ready (one is never redy) – he is busy – he cannot go with them – then he sees the tattoo of the White Rabbit on one of the partyers – a Trinity manifestation – he immediately says he will go. Without question, he puts aside his former everyday selves, and follows the guiding light of his Anima. The next he finds turmoil. This is the dangerous confrontation with the Unconscious in the modern world bereft of psychic experience and knowledge. Mr. Anderson has never been there, 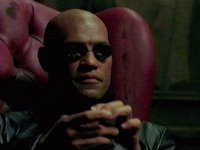 and most who try to go there (as in the Pokemon movie) will not survive the journey. But Mr. Anderson’s instinctiveness in abandoning his reason-based matrix and hearing his intuition assures his Salvation. The Matrix is a classic journey to the Self and one like all others. Every journey a man has to the Self is exactly like this: A female voice invites you to the Psyche and her world, the yin world – (but her Dark Face – vagina dentada - might eat you). Within that journey a man will find the Self if he is strong and if he can survive the Confrontation with the Self – the part of the person which is part of the Universe – the Lord of the Unconscious/Morpheus – and find a new self with a new name. In this Awakening, the new psychic life casts off the old as an abandoned skin. Neo represents us in the world today (or the one half of the world which identifies with the Neo journey/will be opposed by those who do not

in equal and opposite counterforce). It is an active journey of the Collective Unconscious. The movie is a catalyst – an avatar – to a greater Awakening of the general public. It could go on to greater phases just as the Mahabarata went on volume after volume. The arcane elements in this series – the Twins, for example, (like the Twin John Paul Popes in occult folk lore, Church arcania, dreams and the zodiac, appear as Gates) present a public dream of a new world hatching. I have only talked to women who have had this journey. They dream

of Twins at the beginning. Sometimes they are twins or have twin siblings. They dream of all these elements. But it is interesting and perhaps significant that this picture occurs at the turning of the millennium. Neo emerges a different man. There is a whole cosmology today from Stan Lee to Star Wars to The Matrix, The X Files, Stan Lee again with new movies, The X Men. These have profound inner intricacies which are confluent with mythical and anthropological thinking and have perhaps implications.

Posted by Bernie Quigley at 2:54 AM

Of what are you talking?
generic hydrocodone