Notes on Lost – 3rd Season, Episode One: Lost is an Aquarian Creation Myth 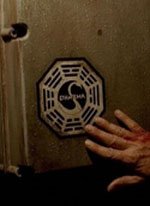 I’m going to put a few notes ongoing about the TV show Lost over the next few weeks – it is a remarkable show and a milestone in TV culture. These are notes and impressions.

How Lost works on several levels: In the last season Henry Gale (Ben) was identified as a Christ figure by the Christ wound given him by Danielle and by the book, The Brothers Karamazov, by Dostoyevsky, in which the prisoner is identified as the Christ in the chapter The Grand Inquisitor. Mr. Eko confesses his sins to him, but Henry Gale (the name of the uncle in The Wizard of Oz) doesn’t understand that he is the “Second Christ’ (perhaps the first did not know he was the First Christ). As the story goes, this third season, all is explained. Ben is a cult leader seeking information. The “real” Henry Gale, the black man buried under the parachute, will be explained – perhaps he was at one time one of the Others. But within the scene itself before the explanation unravels, there appears to be two Henry Gales and we know that the live one (Ben) is supposed to somehow represent the Christ. It appears that Henry Gale leaves behind his “old self” for a new incarnation. This is the classic telling of ’s kicking aside and stomping on a dwarf – in many Hindu pictures and also in Tibetan Buddhist (See "Lost: a Taoist Classic" on Quigley in Exile). When rises in the new body, be is ready for his new dance of creation “dance of life and death.” The Christ’s second creation is Aquarius. Lost is an Aquarian Creation Myth. Suggested reading: The Aquarian Gospel of Jesus, the Christ (1920, reprinted, Garland Publishing) by Levi H. Dowling

Entering the third season, the Others are revealed to be a kind of Dharma cult, something like Naropa, but with computers and Bucky Balls. J.J. Abrams attended Sarah Lawrence – perhaps he studies with Joseph Campbell – the show is quite knowledgeable about depth psychology and myth, and taught at Sarah Lawrence. Notice the lights and darks; Jack has a wife and a dark (Spanish) mistress. Then on the island, he has affections for Kate and (dark) Anna Lucia. At the Others camp he may draw affection from Ben’s (Henry Gale’s) girl friend who looks like his original wife.

Until now Jack was almost always with a back pack on and so have other characters. This is a common dream image of someone on a spiritual or psychological journey.

Ahead, Mr. Eko has been shown to be the man of unequivocal faith, while John Locke’s faith is all in the head. Locke fails, but Eko will bring the Dharma Inistative forward – Locke to be his second, following in Eko’s faith. Ben as a Christ figure is way interesting because although he is identified by the Christ wound and the Bros. K book, we see him and we know him to be a bad character – manipulative and self centered – he leaves his girl to die in the prison and Jack saves her. Easy to see that the entire Others cult is tired of Ben and the whole Dharma deal. But Mr. Eko does not see the bad parts & could take him – Ben – as the second Christ; the second face of Christ in the new Platonic month. FYI Lost is about a shift in Platonic Months, a 24,000 year journey around the sun under 12 signs of 2,000 years apiece. The procession started with the Birth of the Christ, 2,000 years ago. We have just left the Age of Pisces, the age of Christ and Mohammed (the dual fish in the zodiac sign) and entered the Age of Aquarius on January 1 of this year. From Madame Blavatsky to Salvador Dali, there has been the suggestion of the Second Christ as a Buddhist monk. Eko, most sincere of the faithful, is making the transition from traditional Roman Catholic to New Age Buddhist/Taoist (the 108 clicker suggests the Tibetan rosary which has 108 beads – the Dharma insignia is the Ba Gua, sing of the tai chi).