A Democratic Party with Southern Characteristics 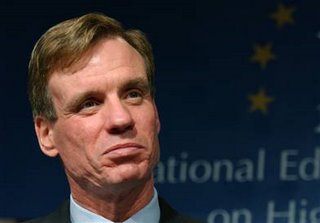 Mark Warner’s decision not to run for President left a large hole in Democratic politics. Warner, born in and reared in , brought a winning smile and a winning strategy to the campaign trail. He campaigned for his Virginia Governor’s seat at Big Top churches and at the NASCAR track, where Nantucket liberals fear to tread.

He may also have transformed contemporary Democratic politics. In Warner's tenure as Governor, Virginia can be seen as a Petri dish. Warner proved beyond any doubt that the South and all of the red states can be brought back home to the Democratic Party by a genuine, enthusiastic and sincere politician with excellent management abilities, who respected his fellow Southern citizens as he found them.

As Governor of Virginia and as a Presidential candidate, he abandoned the politics of confrontation and established a new model, reaching across the isle to create working relationships with Republicans and ignoring ideology and issues-oriented strategies which often alienated mainstream voters and filled Republican ranks.

In , Warner would refuse to enter into the politics of confrontation and polarization when reporters pressed him into positioning on the most contentious issues. He once answered, “97% of what I do is management.” Jim Webb, candidate for Senator in , said all his anger and contention fell from him after 9/11. It should everyone.

It’s a management thing. The Democrats need to understand. There is the essence of the new paradigm in Democratic politics, and although Warner has dropped out for the time being, the same management-based political model has been adopted here in with great success by our Democratic Governor, John Lynch. He faces reelection next month with 80% voter support. Three Republicans in New Hampshire state races have cited their support for him in their campaign literature.

It is often said up here that is a Southern state. Lynch’s election to office did parallel Warner’s in . Like Warner, who followed the ideological Republican George Allen in office, Lynch followed a similar Republican with cranky, eccentric ideas which were Republican political novelty a few years back. Here in , it washed out quickly after two years. Lynch followed with the new model. He does not represent a return to Northeast Democratic politics as usual. Like Warner, he brings an entirely new approach and brings perhaps a historical turning; a return to sobriety, good management, bipartisan cooperation and common sense.

Warner and Lynch bring good news for the Democrats. But the list of remaining Democratic

Presidential candidates cited in an AP story about Warner’s decision not to run could bring the country to a crisis in 2008. Most are senators. None have serious management experience. Some are eccentric and inexperienced. Others have been mentioned recently simply because of their ethnic status or because they look good on a horse.

Of the three frontrunners suggested, only John Edwards does not entirely alienate the South, and the . Wes Clark was not on the list, nor were any inspired or prominent Democratic Governors like Lynch, Mike Easley of or Ed Rendell of .

Warner had hired political strategist Dave "Mudcat" Saunders to help manage his Virginia Governor campaign and Saunders is partly responsible for beginning to return Southern people to their Democratic Party roots in Virginia. Shortly before Warner announced that he would not run for President, Saunders went to work for John Edwards.

Perhaps a new group should form today to rebuild the Democratic Party on the new paradigm which Warner, Saunders and Edwards are bringing to the Democratic Party: A new politics which would bring Southern, Texan and Midwestern politicians into the mainstream, and which would encourage and draft candidates like Easley and Kansas Governor Kathleen Sebelius; moderates and conservatives who have abandoned contention and culture wars in favor of cooperation, and who bring with them management abilities and expertise.

It would be a party with Southern features, and it would set as its goal the recovery of red states lost to Republicans.

I’d be the first to nominate my Governor for such a task force or committee to investigate. , in most approximations, is blood red in a sea of light blue. Wes Clark should surely share leadership on such a committee. As Marcos Moulitsas of the Daily Kos pointed out, with Warner out, General Clark is now the only outsider in range of the 2008 Presidential race. (That Clark and Warner, the only two candidates with high distinction as managers, are considered "outsiders" is what the Democrats need to start thinking about.) 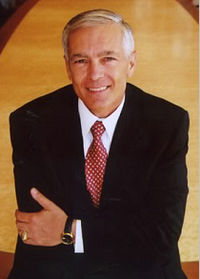 And Clark is a paragon of Southern experience and character. He is a manager first and foremost, and he has been traversing the heartland tirelessly since the election, lending support to Democrats in the Ozarks, and just these last few days.

But such simplicity doesn’t seem to be pulling the press. The mainstream press is pretty well fixed, Hedgehog like, on the Hillary and the anti-Hillary thing; Warner being the anti-Hillary. They can think of little else.

The Democrats and the press which follows in their wake appear to suffer from visions and ideas whose historical time and purpose have passed, but whose aura still lingers on in the valleys. and have led the way to a critical turning in Democratic politics and Warner and Lynch represent that turning. The will and intelligence is available to awaken and bring the new paradigm to life. It’s just that the old coat is hard to shake off, especially because the press sees no other path on the horizon and continuously defaults to old ideas.

Part of the problem lies in history and geography. We are at a major historical turning come about by the shift in major economy from North to South. It hasn’t fully matured and manifested yet in the South, and the North, against all odds, refuses to let go.

The problem also resides in the very idea of liberalism. It has lost its true path and purpose over recent decades as a moral initiative and duty and become instead a posturing of public piety and a social style of identification and status (as one would identify with Starbucks or suburban soccer moms); one does not oppose global warming so much to protect the environment as to feel swell about protecting the environment and to identify with that position as "our kind" in polarization of those the swarty Others who are not "our kind" (NASCAR moms and Big Top Southern church goers).

I was raised and educated in New England and worked the most part of my grown up life in . My father worked in cotton mills in , and so did my mother’s family.

This is something the new people who come to the Northeast (like the ) need to know about us: What you come here to seek no longer exists. The angel has passed. The spirit of enterprise which came here from , , filling , , and , with hundreds of quite beautiful stone and glass factories and millions of immigrants, left almost a hundred years ago. The cotton mills have gone South. My father was an electrician. He turned the lights out.

There is no as it is imagined to be by outsiders. Eric Sloane, chronicler of our old covered bridges, wood tools and great Yankee barns, said it passed in 1865. The old school Yankees, like the Bush family, all moved to in around the 1930s. It is the same in . It passed away at the same time. James Thurber, the great cartoonist for The New Yorker in the 1920s is said to have written on the ceiling above the stalls in the building’s men’s room the words, “Too late,” for those who came after him.

Red state is destiny. The life force that was the Northeast dissipated before the end of World War II. As population moved South people moved South. Economy is moving Southwest now and population is still dropping in the northern states as it has been since World War II.

And as economy went to the South, so did political empowerment. A new cultural relevance emerged. The rise of the Christian Right, the roar of the NASCAR track, the sweet and North Carolina Baptist choirs which have long been the mainstay of the Newport Folk Festival and even the popularity of Connecticut-born George W. Bush are evidence of a fundamental shift in American culture. And Otis Redding and Little Richard and Dolly Parton and Billy Bob Thornton.

The South has risen. It is strong. This cultural arc is exactly equivalent to the economic boom of the 1800s, which brought with it the rise of Irish popular culture which enriched New York, Boston and America in the late 1800s – John L. Sullivan, the popular operatic John Mccormick, and the great run of blarney in music, literature, the dance and Vaudeville hall and later, the big Hollywood movie screen.

The Northeast Democrats and liberal culture seem to be in denial of this.

What continually curses them is the illusion that although economy may have moved away, is still the center of information, opinion and influence. Certainly it dominates, but it continually fails them. Perhaps because the Northeast no longer centers economy, it yields so easily to narcissism and nihilism, the dark muse of the empty vessel. Power follows economy, and if the Democrats expect to go forward, they must follow power.

The Democratic Leadership Council came into being after Ronald Reagan won a landslide victory in 1984. The idea was to try to make the Democrats more like Republicans – Republicans with more fanciful hair, said one wag. It was a false and imitative effort and ended up alienating the large swath of known today as red states.

What the Democrats should have done back then was ask themselves why the South, and the had abandoned them in droves. Howard Dean said he wanted to go after those guys with Confederate flags on their trucks. We know what he meant and it was a good idea. It is exactly what Mark Warner had already done with grace, vision and aplomb, and it is exactly what the Democrats should do today. But a former Governor from Vermont, the Magic Mountain of avant-garde liberalism, cannot start that discussion and even the suggestion brought widespread alienation to the red states.

Nevertheless, the discussion should start and it should start in , , , and . Texas especially as it is the big place, and as New York was to the old industrial America of vast influence in the world between 1865 and 1929, so Texas is to the new economy and the new culture just very recently awakened and yet to reach full expression beneath the Mason-Dixon Line and west of it.

Only the South can fix this party to make it work again as the South made it work for the Republicans in the 1980s.

But , , , and , our singular jewel in the , should be talking and listening as well. It is a good fit for .

If you all fix it we will follow you. We have no place else to go.
Posted by Bernie Quigley at 11:36 AM