by Bernie Quigley for The Free Market News Network, 7/20/06 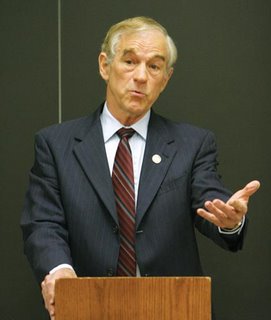 In case you missed it, it was a remarkable event. Ron Paul, representative from and a regular voice on these pages, speaking eloquently in Congress and broadcast on C Span, a singular voice of reason, courage and integrity, a lone star, rising from . Paul was speaking in opposition to the ongoing actions in the Middle East, involving on the one hand, the , and on the other, . You recall that the Texas Ranger rose from the dead to a heroic life, in the great American epic of the Masked Man. That was the picture I had of Paul.

The other voices were disheartening. The constant waves of rhetoric by skilled and effective propagandists, wave after wave of the same we have heard for decades now, supporting ’s role in propping up the state of .

I have never seen President Bush look so happy. This is it, just like we heard it coming for ten years on the folkloric short-range radio stations in the hills of and . Armageddon. Jump starting the Rapture and the Second Coming of Christ.

No exaggeration. At the beginning of the war on I had the pleasure of informing some of our allies in the House of Commons of the regular programming in the mountains of and running throughout the , calling for war against Islam to the end of the world. They were in disbelief, or maybe it was denial. The Left Behind books clearly state the premise. They have sold over 100 million copies.

At the beginning of the war on there was some concern by rabbis in as the neocon plan to help the Christian Zionists jump start Armageddon was so explicitly outlined in the Left Behind books. But, asked the rabbis, doesn’t this theme go that in the end the Jews will be destroyed? Have you all thought this through?

Something else: Anyone who lived in in the 1970s will have noticed an ad placed on page two of The New York Times every morning, right next to the Brooks Brothers ad. The ad was placed by Hasidim Jews fairly recently over from to neighbors adjacent to mine. The Russian Jews warned non-orthodox and secular Jews against . In the wise tradition of Kabala, there are always two paths; one leading to grace, one to disaster.

Today, as we watch the disaster unfold in the Holy Land, speaks with one voice apparently, and that is the voice of that Midwestern Methodist Bible Thumper, Senator Clinton. As she told The New York Times yesterday, she supported “whatever steps are necessary” to defend against Hamas, , and . must show “solidarity and support” for in the face of the “unwarranted, unprovoked” seizure of three Israeli soldiers by members of Hamas and Hezbollah, which she described as among “the new totalitarians of the 21st century.”

“We will stand with because is standing for American values as well as Israeli ones,”

CNN’s Lou Dobbs, who’s voice is becoming that of a new man of the people, was more reticent.

Yesterday he said: “As our airwaves fill with images and sounds of exploding Hezbollah rockets and Israeli bombs, this seven-day conflict has completely displaced from our view another war in which 10 Americans and more than 300 Iraqis have died during the same week. And it is a conflict now of more than three years duration that has claimed almost 15,000 lives so far this year alone.”

A good thought. But it’s not two wars. Its one war now.

The neocon strategy depends not so much on Israeli lobbying cash to the cowardly herds in the Senate and the House as to the passivity and denial of ordinary Americans. They have now a fait accompli. Even the passive advocates of the invasion of like The Times’ Thomas Friedman, said it early on: there will never be peace in the without the presence of American soldiers. (Like the appeasers in the Senate, Kerry and Edwards, he changed his mind after the tide turned, and called it a mistake.)

We hear only occasionally of four permanent bases being built by Americans in , so better to protect our Israeli ally. Yet the important blogs, which should be speaking up, are strangely silent on the invasion of . Content to chase mice instead. If silent now, hold your peace thereafter.

The best public article in the public venue I have seen on the Israeli invasion came from Harold Meyerson of The Washington Post.

“I wonder if this is how the summer of 1914 felt,” he asks, reviewing the history of Europe’s decent into a century of total war, “ . . . how the kidnapping of three Israeli soldiers (and the killing of eight other in the Hezbollah raid) has escalated in less than a week to what may be the brink of a cataclysmic regional war with ghastly global implication.”

Meyerson ends with a call for a “genuine international army . . . and more assertive than the Boy Scout troops that the United Nations periodically deploys . . . is needed to restore the peace.”

It is the neocon’s dream come true, but it is not a bad idea, because there are so few other options now in these last few days. For decades we have passively followed their cues like bread crumbs leading us into the forest. Now there is no way out.

We have to again face the same primary question we faced at 9/11; at the failed governmental response to Katrina and time and again as the invasion of was planned and executed.

Has federalism as Alexander Hamilton conceived it failed as a business model? It was perhaps the perfect model 180 years ago when almost all Americans were either factory workers or field hands. But the evidence grows daily that as a business model, One-Size-Fits-All Federalism no longer delivers the goods of conferring citizenship or of enhancing the productivity or the spiritual and cultural growth of Americans.

If so, the Democrats have no solution, nor do the Republicans. Libertarians have solutions. Indeed, the few Libertarian “free staters” who moved up here to last year might be consulted.

Every state should be a , and if we 300 million of us can be herded off a cliff by so very, very few influential lobbyists and propagandists with sacks of cash in hand, then we are not a free people. Perhaps we have come to act as hordes rather than citizens because under the Hamiltonian vision, people have no sense of place. People today no longer identify with a particular place and its holistic culture, but are drawn instead to the vaguest of secular themes and seek identity in the most ephemeral vagaries of popular culture. Under ’s vision identity is linked not with a idea, but with an actual place.

This distinction is at the core of our identity on the North American continent. Nothing has shaped us more than the conflict between these two views. From Jay’s Treaty to today we have followed the view which strengthens the massive singular force. ’s view strengthens the region and the family. It was sent into remission in 1865. We should look at it again.

I don’t think that at the moment we are on the verge of a third World War. But clearly, as Meyerson outlines the passage of events that quickly tumbled out of control in 1914, it is troubling. The question is now, do we have the courage to shape alternatives?

Perhaps we don’t. The great ambassador George Kennan considered when he had neared death that the was too vast a country to be a real democracy; that the Hamiltonian direction made us subservient instead, and he cited the 75% of Americans who fully supported the invasion of . He endorsed the idea of the development of regional circles of autonomy as ’s vision proposed, the same idea which was quashed in 1865.

On one blog yesterday I did see an interesting headline from not in lockstep with Hillary: It read, “The Sovereign State of New York.”

A does not follow blindly to warfare engendered by a handful of sociopaths and radicals who manage to find their way into the state department. It is not in ’s long tradition either to follow such crumbs into the forest, although we have been doing so since 1865.

But maybe we won’t this time; indeed, let’s consider, never again.
Posted by Bernie Quigley at 6:42 AM