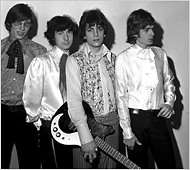 At the beginning of things there is always a man or a woman, half avatar, half man and sometimes half mad, who awakens the others and sometimes awakens the world. They are later forgotten and despised. James Otis is forgotten, John Adams remembered. The names of those killed in the Boston Massacre are likewise forgotten for the more dignified; the Gray Champions of the Revolution. The Beatles had such a friend, Stu Sutcliffe, an art student friend of John Lennon, who left the group early and died young. And as they recorded Sgt. Peppers at the studios in , in another room in the same building was another man like that; Syd Barrett (second from right) who was recording an album with his new band, Pink Floyd.

He would leave the group shortly as Stucliffe left The Beatles, but his influence would awaken one of the very few groups of performers of the period that went beyond sociology and into the spiraling arc of raw art and awareness; a true artist’s journey which could claim kinship with Lennon’s.

Pink Floyd was pilgrim’s music; artists striving to retain sanity in their quest for fuller consciousness; spinning inward in a world which had been spinning outward for 500 years. Just before the period began, Swiss psychiatrist C.J. Jung had made observations about his patients who were having dreams and visions of UFOs. What was similar in many of these dreams was that the person often commented that she or he had burns on their faces. Jung’s comment was that these dreams brought the dreamer to a new consciousness; or rather to an old consciousness which had been left behind in the march to the material outlook of the past 500 years. They were suddenly Awake, and the shock registered in dream as a burning shock of a sudden awakening of consciousness & enlightenment. I’d always thought of all the Sixties group (which were different from the 70s groups) the music of Pink Floyd most explicitly expressed this same phenomenon. First day awake and the shock of awareness sometimes brought madness and death. (But everybody dies.)

The later lyrics of Pink Floyd are about the Self and the Anima if one wanted to do more than dismiss them as madness. Summer play might match them with The Upanishads and the Tao te Ching and with a reading of some of Jung's work (Memories, Dreams, Reflections & Flying Saucers: A Modern Myth of Things Seen in the Skies) on these themes. They are prefect gate openers for anyone wanting to explore the inner life. But Syd Barrett wrote more simple work, including touching lyrics about his cat.

“That cat's something I can't explain,” he wrote in Lucifer Sam, a song on the album appropriately called, The Piper at the Gates of Dawn.

I liked this because you don’t have to go to the dark side of the moon. It’s all there in your cat.

He died yesterday at 60.
Posted by Bernie Quigley at 5:42 AM

Great Work!!!
this is a good link you can refer Art Collection

Hello Friend! I just came across your blog and wanted to
drop you a note telling you how impressed I was with
the information you have posted here.
Keep up the great work, you are providing a great resource on the Internet here!
If you have a moment, please make a visit to my cristian music lyrics site.
Good luck in your endeavors!