by Bernie Quigley for The Free Market News Network, 7/15/06 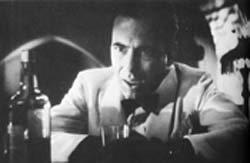 Let’s begin again from the beginning and look to those who held the coats, turned aside or insidiously egged them on from secret and private places. We have come now to the verge of great human disaster and we have come daily over the last four years. We have come by increment; by the accumulated cowardice of those who waited for the storm to pass; by the timidity of those in public places too weak to speak up; by journalists and government officers too afraid to do their jobs who yielded instead at the moment of crisis to accommodation.

Forget the public caricatures who spiraled this disaster upward; Brooks, Coulter, O’Reilly, Krauthammer. God made them Tricksters and Monkey Gods to test us and to send us into difficulty. (It is how we grow.) Let’s look to the human element they awakened and seek out those among us who did not find the moral compass to guide them or the instinct to act with honor and character when the moment drove us to action. They have failed us. They have failed to do their job and they have failed the Republic. They need to go home now. And if our Republic is to live in honor (and when all systems and standard practices fail, honor is all that is left), they need to be clearly named and their actions taken out of obscurity for all too plainly see.

Appeasers: Most prominent among them, Democratic Senators John Kerry and John Edwards, who voted for the invasion of knowing full well that it was planned in secret corners of the Pentagon and at the offices of lobbyists and think tanks a dozen years before. They hoped it would end in a week as the Trickster pundits of war told them it would. Today, with astonishing hubris they continue to seek office and influence after announcing their vote was a great mistake.

Fellow Travelers: The mealy mouth and the mediocre in government offices and at editorships of influential newspapers and news outlets like The New York Times and the BBC who were promoted to their positions directly after “Mission Accomplished” day. Check the record. They are everywhere in our Republic and in Europe’s Lost Tribe, our elderly ancestor and protectorate just across the , at newspapers and in government offices. Most are as incompetent as Porter Goss, who set the paradigm, come and gone so quickly as CIA chief, but to no one’s surprise. We could include here those who beyond the imagination of our Yankee ancestors did not appease so much as accommodate, and brought to even local newspapers in the high mountain places of New England articles promoting torture of political prisoners and shameful and illegal acts of war (rest assured; they are all from out of town). We might include here the names and faces of the British advisors and prominent American journalists who advanced the idea of embedded journalists, insuring from the beginning a human rights disaster.

Collaborators: Hillary Clinton and Joe Lieberman. Those who directly supported this disaster and still do either because they are too stupid to be in public office or too shrewd. Either way; put them on milk cartons so the children will know.

We are now at a moment; a moment like that portrayed in the movie , about an incident at Rick’s Café American which turned the world from accommodation to character. Today we are all Monsieur Rick, tormented and torn between man and mouse, waiting for the man of courage and valor and resolute conviction to arrive and order the playing of La Marseillaise.

Maybe it is the first day of the new century. Or the last day of the last. Yet in spite of everything, it is auspicious. We have now seen the worst of what the American condition has to offer, played out in public lives in full. But behind the curtain others are emerging, among who are likely to be the best among us. They are: Jim Webb and Mark Warner of Virginia, General Wesley Clark, Kathleen Sebelius of , Mike Bloomberg of , Mitt Romney of Massachusetts, George Pataki of .

None of these political leaders were in a position to appease or collaborate when the moment of crisis came and went. Let’s start again here and start from scratch.

Posted by Bernie Quigley at 6:12 AM

Great Work!!!
this is a good link you can refer Art Collection