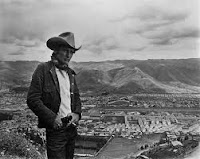 Pictures go a long way in explaining; how would Hemingway have done without the masterful beard or James Joyce without the severe Irish angles and heavy shadowing in his face? George Orwell said we are all responsible for our own faces by the time we get to 50: Your picture becomes your icon. Which is why George W. Bush may have gotten off to such a rough start. Posed cutting brush in a brand new cowboy hat he brought to mind the “I’m a lumberjack” skit of Monty Python. Not a lumberjack, not a cowboy and not really a Texan.

It was a portrait of insincerity and the Republicans are still trying to work it through. The Bushes, try as they might, are plagued by this inauthenticity and don’t seem to fit or belong in Texas. H.W. had the same problem with the cowboy boots. Luckily, Jeb makes no claim to the West and so the traditionalists – the establishment; that is, the Eastern Establishment – hope today to bring it all back home with Jersey’s Chris Christie in front and Florida’s ex-Gov. Jeb as back up.
It might work for now but it won’t work later, because nothing will stop America’s drive to the west. It is our essential myth and destiny and more important to our centuries ahead that the Puritans short and symbol visit to New England. And the 2012 election could be the turning point to our rising destiny.

And Paul Bedard’s Washington Whispers of U.S. News and World Report reports a new Republican 2012 contender in this critical transformation. Texas Gov. Rick Perry:
“Considered a very long shot by GOP pundits and political analysts, nearly one in three of those in our [Synovate eNation Internet poll] chose Perry as the sitting governor most suited to challenger President Obama. By getting 29 percent to choose him, the two-term Perry shows that he could be a force in the upcoming Republican primaries, though it also suggests that voters aren’t satisfied with the more established GOP names in the 2012 field . . . The poll was also good news for New Jersey Chris Christie and Indiana Sen. Mitch Daniels, Christie won 27 percent, Daniels 22 percent, as the governors ready to run against Obama.”

Recently, Perry had kind words for Christie because of his efforts to cut spending in New Jersey and it is interesting now that this poll pits the two potentially against each other. It follows a pattern which might be called Eastern Establishment vs. “New West” first identified in Perry’s gubernatorial primary last year. His opponent, Senator Kay Bailey Hutchinson, had the support of the full Republican establishment; Dick Cheney, George H.S. Bush, Karen Hughes on behalf of W., Karl Rove and others. Perry had only Sarah Palin in his camp and won in a landslide.
Posted by Bernie Quigley at 5:31 AM