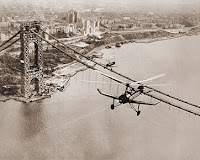 A phrase recently appeared in the MSM: “anti-establishment conservatives.” Brings to mind that well-worn phrase of the Sixties, “counter culture.” But modeled for a new century and for new generations. Sarah Palin first busted out and today conservatism – from Rand Paul and Judge Andrew Napolitano to former New Mexico Governor Gary Johnson and Donald Trump - bristles with creativity. It brings a change of paradigm to American politics and culture and suggests a forceful will and intelligence at work in its desire to become real. Commentator Michael Barone compared the change to that of the Sixties. There are now three elements: Democrats, Republicans and the new conservative counter culture which has no real name yet. By 2012 it could well become the new mainstream.

NY Daily News columnist S.E. Cupp has a name to add to the new people; guitar hero and Michigan Rep. Thaddeus McCotter, author of a new book, “Seize Freedom!: American Truths and Renewal in a Chaotic Age.” She says he could become the next President of the United States.

“At a time when so many Americans revile politicians for being part of the establishment, he sits unnervingly outside of it, at a matter-of-fact table with a matter-of-fact sign. So un-Trump,” she says.

In fact, McCotter might be seen as the anti-Trump.

McCotter is unflinchingly conservative, an unapologetic defender of American “exceptionalism” and the war on terror; he prizes good works over big promises, she writes. He was one of 59 Republicans who voted against House Speaker John Boehner’s last-minute budget deal with Democrats, making him a favorite among Tea Party voters.

He speaks better than perhaps anyone in Congress and thrills the crowd whether at the folkloric Tea Party rallies of heartland America or at Dartmouth student events.

Say what you like about Donald Trump and the usual bitter invective will come forth as it did with Sarah Palin. But when the Trump helicopter landed here in New Hampshire two days ago it was like the Beatles had landed. And it will be a tough act to follow.

Key to Trump is this phrase he used yesterday in Las Vegas, the most appropriate place to begin his campaign. From The New York Times: “Even as Mr. Trump upbraided the country’s leadership, he reserved his greatest scorn for a New York landmark. He told the crowd he was tired of returning from Asia, where the bridges make the George Washington Bridge look like a ‘toy.’”

It is perfect zen symbolism as Trump runs in opposition to the frumpy old GOP Establishment (Rove: “joke candidate”; Krauthammer: “provocateur and clown”). They want to refurbish old landmarks. Trump wants to build new bridges.
Posted by Bernie Quigley at 5:06 AM