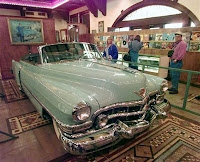 This is from The Wall Street Journal’s “Journal Community” which I take it is a blog. What I think is interesting/relevant/thoughtful about this brief commentary, “Donald Trump for President” is the way in which it compares Donald Trump with Ronald Reagan:

“Donald Trump has thrown his hat, so to speak, into the 2012 Presidential Race ring; and he remains, still, without one hair out of place. But is he serious or this he playing US? I think The Donald is very serious, and I definitely do not think he should be taken lightly. In the context of the current political and entertainment atmosphere that now permeates the country, Trump actually makes a lot of sense as a candidate; even more so, and this is a big IMO, than Reagan did when he ran. Donald Trump is a multidimensional businessman / newly minted entertainment mogul, who has a very strong personality, is very pro USA, and once he unleashes himself into a project becomes a bare knuckles formidable opponent. And for these reasons he appeals, at least currently, to the Tea Party movement, whose roots lie in the hope that we can get this country back to its roots.”

The writer talks about the “context of the current political and entertainment atmosphere that now permeates the country.” Trump makes sense, even more so “ . . . Than Reagan did when he ran.” This correctly understands Reagan’s popularity: He was not a popular President “in spite of” the fact that he made movies like “Bedtime for Bonzo” but BECAUSE he made such movies. He was the heartbeat of post-war, populist America, and Donald Trump may be as well as a purely populist figure. If we wanted it to be different we should not have passed the 17th Amendment in 1913.

That liberal America has become entranced by figures like Bill Clinton who was a Rhodes Scholar or by Barack Obama who was editor of the Harvard Law Review is a symptom of decline. It is what used to be called “lace curtain.” Let the Canadians elect a liberal PM because he taught at Harvard. America is yet the robin-egg blue ’52 Cadillac convertible, chopped and channeled, rolled and pleated, with lakers and moon disks that Neal Cassady drove the Dharma Bums across America in or that Hank Williams died in the back seat of seeking Jesus. And it is the better place to be.
Posted by Bernie Quigley at 6:05 AM