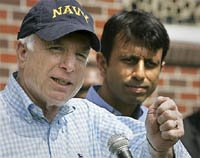 President Obama’s call for “bipartisanship” is lacking in any authentic desire to go to the opposition and find a center between. Instead, he tries to find Republicans who are conservative in style only but in culture and principle are the same as he is. What the astute political commentator Ted Nugent calls RINOs; Republicans In Name Only.

Judd Gregg, the senator from New Hampshire, did the right thing in turning down the Commerce position when what was underneath became apparent. Obama’s call now will go to Republican Jim Douglas of Vermont and California’s Arnold Schwarzenegger, both from the most liberal and most blue states in America.

And that is the core of what is unfolding in the Obama administration: The President is consolidating political strength in all the blue states in opposition to all the red states. This is potentially a dangerous error of historic proportions.

Here in the northeast, red state/blue state history is misunderstood. Red state/blue state contention is, to paraphrase military strategist Carl von Clausewitz, an extension of war by cultural means. It awakened when the Christian Right rose as a cultural force in opposition to the perceived decadence of the hippies and radicalism in the North in the 1960s. It took power as the Southern states and the extended red states in the heartland gained in economy in the 1970s and 1980s, becoming an actual contending political force with Ronald Reagan.

These two forces might be considered agrarian America and urban America. Urban America with Obama has defaulted to the French cultural model of socialism, which is anathema to the red states and agricultural America. The red states have different roots, different cultural bearings and different mythical beginnings than the blue states. They have shaken their European traditions. It is not in their nature to look to Europe for anything. Blue states since Woodrow Wilson are an extension of European culture although this is only a default of traditional northeastern attitudes.

The liberal blue states momentarily have slightly greater population than the red states and have come to political dominance with Obama. But it is entirely necessary for the liberal blue states to bring in policies that can be accommodated by red states and are to some degree acceptable to the red states. This should be politics 101. Instead, Obama has taken the “whistling past Dixie” approach. Consolidating blue against red to such a degree exposes a conquistador posture. Speaker Nancy Pelosi put it bluntly: We won. We will do anything we want.

A recent press report says Obama will unite us as Lincoln did. Say what?

The blue states have written our history since Washington teamed up with Hamilton and Adams at Jay’s Treaty in 1794. But they have been receding in importance since World War II as population and economy headed South and West. The Obama Presidency might be seen as a movement of descending karma; a remembrance of things past – Lincoln, Roosevelt, Kennedy - and the end of these things. A nostalgic journey bereft of any new life force, prone to accident and missteps, like the Academy Awards’ stale recollection of the 1930s.

The South, the West and the red states have grown simultaneously in ascending karma; coming into prominence gradually. But they could springboard to dominance overnight in opposition to Obama’s February Surprise; his French socialist agenda.

That could happen and it could happen tonight when Bobby Jindal, governor of Louisiana, provides the Republican response to the President's address to the joint session of Congress. Jindal could take the day and take it from Obama. Again, as in the Academy Awards, where the usual suspects seemed as dry as leaves in winter in comparison to the youthful and vital new crew; a vision of awakening grace from India.

Lincoln, Roosevelt and Kennedy all brought northern and blue state initiatives which dragged the red states along, sometimes kicking and screaming. They were great men not because they tried to reconstruct the past as Obama attempts to do today but because they ignored the past to begin the world again. There is no question that we today are at a major historical and cultural turning. But it is the red states that are on the verge of an awakening today. And Governor Jindal could well be the catalyst.
Posted by Bernie Quigley at 5:34 AM

here is a thought, bernie--obama will create more black and latino republicans than any member of the GOP could ever dream doing.