Today from Water, Wood and a Wolf

"Two satellites, one Russian and one American, have collided some 800 kilometers (500 miles) above Siberia, the Russian and U.S. space agencies, said Thursday." Fuck.

It is unbelievable that two of these things could accidentally smash into each other randomly in space. Nothing represents the post-war age as the rise of Sputnik and the competition between the U.S. and the U.S.S.R. As a symbolic event and a synchronicity my thought is that this competition is over. 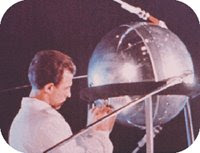 I mentioned here to Gregory a few months back and Christopher commented on it that the key stress I see in the U.S. in the next decade will be competition between the red states and the blue states here in the U.S. I wrote an article this morning about how American political attitudes since 9/11 have been sociopathic. The "Greatest Generation" thing brought a great pretending that the Iraq war was like WW II; we were pretending to be in WW II and be "like the Greatest Generation." Now we are pretending to be in the Great Depression. Both sides - Dems and Repubs - are locked in neurosis: as Norman O. Brown wrote in the 1950s: Neurotics don't remember, they repeat.

Jim Rogers, the commodities guru, has given up on New York moved from New York to Singapore. The U.S. vs. U.S.S.R. competition reflected the antipathy and division of the Roman Empire in Rome and the Empire in Constantinople & likewise the Roman Catholic Church and the Eastern Church of Constantinople; they have been at odds since the 3rd century. 'Tis over today.

Y'all see Lost last night? John Locke turns the style in the "center of the world" shifting the karma from the Age of Pisces to the Age of Aquarius. Ben in this saga represents the Christ gone mad (in secret television language to hide from the censors - just like the Russians did in the 19th century) in the last of his 2,000 years ("Ben" = "Son" in Hebrew & Ben is identified as the Christ by the Christ wound in the chest and the book John Locke gives him in season two - The Grand Inquisitor" by Dostoyevsky, in which the Christ comes back and is imprisoned and tortured, as Ben is here). John Locke - agent of the Enlightenment - is the Aquarian.

Posted by Bernie Quigley at 3:56 AM