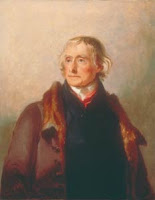 The Center No Longer Holds: The Right to Revolt

What are the natural consequences of “generation theft” – the phrase John McCain used to describe the onerous, endless spending bill being passed by Congress this week and representative of the arcane, minority political sensibilities of Barney Frank, John Kerry, Nancy Pelosi and Barack Obama? A bill unlike any other ever passed in the history of the United States. A bill so unfocused, reactionary and reprehensible that it leaves a tax burden to children yet unborn and to their upcoming generations; a virtual political debtor’s prison like those of old Ireland and England where children were forced to pay the debts of their dead parents; like those debt prisons outlawed in early America; a bill which is the opposite of a moral and material inheritance, the natural object and product of the good and happy life and the life lived so well and so responsibly that it leaves something over for the children; a bill instead which demands that the children pay up for the extravagance and waste of their feckless and irresponsible parents and grandparents.

Such legislation gives the children the legitimate right and the moral obligation to revolt.

Welcome to America. The land of the free. The home of the brave.

California today is on the edge of a complete political and economic breakdown brought on by the long-term irresponsibility of its citizens. Standard & Poor’s ranks California’s credit rating last among the states when it should be first. And Standard & Poors has also warned that the United States faces a downgrade by 2012: If we don’t get our own fiscal house in order by then they will nick us, putting us in the same category as Venezuela and Poland. The chances of the dollar surviving today as a reserve currency in this arena are minimal. The best and brightest among investors today - Jim Rogers, for example - are already heading out. He expects to ditch all his dollars by the end of this year for other currencies. The troubles in California today are America’s tomorrow.

Pundits today should not be looking into the mirror and seeing the glowing and reflected glory of Kennedy, Roosevelt and Lincoln like Obama does. They should be seeing Jefferson.
Posted by Bernie Quigley at 5:22 AM