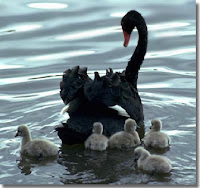 Black Swans at Starbucks: Marketing at the end of things

Our house in the western valley of the White Mountains is older than Tennessee and so is most of the stuff in it. So it is always good to get away and see what is new in the world; cable TV, motel doors that open with magnetic cards and Starbucks.

In my latest journey to the outside I’m feeling a complete change of seasons here in North Carolina. When I first came here 25 years ago I used to go to the original Krispy Kreme in Winston-Salem. In those days it was a smoky cavern filled in the early morning with older men talking among themselves – World War II vets mostly – including Graham Martin on occasion, the ambassador to Vietnam at the end who infuriated President Ford by holding the American fleet in the South China Sea for three days after the fall of Saigon. It saved 40 thousand lives.

In the times which opened up afterr that first period Krispy Kreme caught the entrepreneurial spirit and went global. Then they brought in latte and banned smoking and the men began to drift away. In the later period a Starbucks came in and here you could see the newer generations unfolding by the CDs they would play and pitch at the counter. World music. Good stuff, too. Then in more recent years which might be considered a turning – at near the pitch of the war on Iraq – you could find Johnny Cash as he had just passed away and the Dixie Chicks. Later – last year – they recalled Paul McCartney; the age in dénouement.

But it was a little surprising this time around to see Dean Martin being promoted at the Starbuck’s cash register. Great singer; better than Frank I always thought but I am not of that generation and so don’t have that bonding thing that reinforces Frank among those of his time, nor do most any of the others who come to Starbucks. Was as if they were suddenly marketing to the old World War II crowd from Krispy Kreme. Or else, they had come to the end of things, marketing-wise.

I see this on PBS as well.

All of my adult life, PBS fundraisers have presented an anthropological path up the mountain and down again of my own generation. Rising in to the decades of work ahead they always presented the movie Woodstock at fund raising time, year after year, as we rose reluctantly away from it. Then descending from the mountain was Wayne W. Dyer, Ph.D, and a woman who looked like Hillary giving Buddisty psychological advise; down-market Depak Copras. Then penguins; an ominous sign as penguins are a prey species; benign, aging tellitubies who evolved by escaping predation to frozen and barren places like where I live; the totem animal of the horde that PBS was pitching on documentary, CDs and little desk calendars. Penguins, like the price of gold, are harbingers.

In recent years they have been running old tapes of Bob Dylan and Joan Baez at Newport in 1964 where we who are not Southern first encountered Johnny Cash and where the generation was supposed to have begun (and apparently where it ends); much the same images that Dylan is pitching now on TV to sell Pepsi. Long interviews with Peter, Paul and Mary as well with occasional bouts of Pete Seeger.

But this year everything has changed. This year at PBS fundraisers they present Victor Borge, a classical pianist/vaudeville comedian in tails from the old Ed Sullivan Show. I can’t imagine that anyone under the age of 60 would even know who he was.

This Starbuck’s is now is a cop’s hangout. The Krispy Kreme is still there but the global empire has gone bust and it is empty in the mornings.

Sociologists take note. Economists too and political scientists. Generations come in waves then the sea turns flat. Some social systems and effects are technically hard wired but they interact with soft systems as well; things like love and the feelings music brings, which MIT theoretical physicist Kerson Huang says acts with hard systems but cannot be measured or quantified. And as Nassim Nicholas Taleb says, there are always those pesky and unpredictable Black Swans, like the occasional mad man who comes into Starbucks off the street, asks for spare change then tips over your table. He is part of the equation as well; an essential part.
Posted by Bernie Quigley at 7:26 AM

the people that will change the times will be the kids that are too young to remember nirvana.

i was in middle school when cobain blew his brains out. i remember hearing about it from a kid at school and feeling indifferent. a couple years later we got interent and email capabilities at school.

the generation born after this period will create a change in american culture/politics. until then we may be stuck in a cosmic roundabout.

the question i ask myself is, born in 1981, am i a representative of the old, new, or soon-to-be forgotten generation?