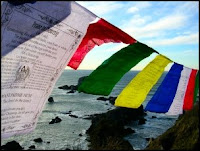 Tibetan Prayer Flags as Economic Indicators: Laffer – “The Age of Prosperity is Over”

Last year, Arthur B. Laffer co-authored a book titled The End of Prosperity. Today he has an opinion piece worth reading in The Wall Street Journal. Little did we know then how appropriate its release would be earlier this month, he writes.

The day ahead is not auspicious he writes: ” . . . just watch how Congress and Barney Frank run the banks. If you thought they did a bad job running the post office, Amtrak, Fannie Mae, Freddie Mac and the military, just wait till you see what they'll do with Wall Street.”

But “Who knew?” asked Alan Greenspan, in televised hearings this week on the financial collapse.

As we work our way through the “stages of grief” - L. Gordon Crovitz’s phrase - it might be worth while if only in hindsight to note that a brave few who systematically analyzed the passages of history did know and predicted the downturn. One of the most prominent books on history’s critical turnings in the last 15 years, The Fourth Turning: What the Cycles of History Tell Us about America’s Next Rendezvous with Destiny, by William Strauss and Neil Howe, predicted collapse in or near America’s 60th post-war year. This is the 62nd post-war year

“Just after the millennium,” the authors wrote, “America will enter a new era that will culminate with a crisis comparable to the American Revolution, the Civil War, the Great Depression, and World War II. The survival of the nation will almost certainly be at stake.”

Economist Harry S. Dent also predicted it: "This is like winter coming,” he says. Dent, an author and consultant told The Wall Street Journal that the U.S. is headed for a slump that will last until 2020. It will take that long for the financial wreckage from this boom-bust cycle to be cleared away and for the 79.4 million strong “Millennial Generation” -- most of whom are still in high school or college -- to enter adulthood and start buying homes, cars and gadgets of their own.

“It happens once every 80 years,” Dent says of this sort of demographics-driven economic cycle. “It's going to be difficult.”

Both these projections work on theories of historical cycles which indicate that history runs in 80-year cycles and the cycle ends after the third post-war generation, which falls 60 years after the post-war “creation.” The entire culture and all of its generational furniture, themes and artifacts travel through a fully-predictable human process much like that which follows inherited money: After three generations there is generally nothing left.

The Strauss/Howe perspective is based on theories drawn from observation by Roman historians. But ancient Taoist philosophers and Zen mystics also found the 60 year, three-generation break.

Indeed, it is everywhere in the east, even flying on Tibetan prayer flags in the Himalayas.

The sequence of Tibetan prayer flags reflects the human progress of rise and decline from birth to death in individuals and in cultures as well. The flags fly in this sequence: white, red, green, gold, dark blue.

In the current American cycle: White - birth (1945, Churchill, Stalin and Roosevelt at Yalta); Red - the power awakening (Eisenhower’s 1950s - building America’s coastal economy and subsequent world economy); Green - spiritual refreshment and renewal (John Lennon leads The Beatles to the East; Maharishi Mahesh Yogi; the Summer of Love – 1967 - the Sixties in the spiritual sense); Gold (Reagan/Clinton period in which wealth reaches its top - "the golden years"); Dark Blue - death, or as Tibetans see it "the between" – end of the life cycle and return to the Earth Mother. The cycle begins again with White – rebirth - 20 years later.

In the Strauss/Howe perspective the “death” in the last historical cycle began in 1929. The reawakening began in 1946; 17 years. As we find economic "death" today in 2008 as Laffer and Dent imply, rebirth should begin around 2025.

Good to know as world capital flees to the yen.
Posted by Bernie Quigley at 7:03 AM