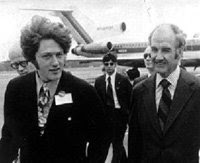 I felt we were getting back to the McGovern effect during the first days of the fiscal crash when Massachusetts representative Barney Frank took the mike on Capital Hill. It was the I’m in charge moment for Frank who has been waiting for as long as I can remember for his close-up. He’s been around my neighborhood half my life as he represents the town where I grew up; smoking cigars and chattering on Boston’s all-night TV shows and generally offering up kookie amusements whenever the camera happened to turn in his direction; bon mots and insider jokes; references always coded to amuse our own kind and geared to tweak or offend the others, which was practically everybody west of Amherst.

So there he was finally in the spotlight, telling the world, “ . . . my boy friend says I need a haircut,” and making references to Andy Kaufman, a Saturday Night Live comic who did Elvis impersonations better than Elvis, but who’s time had come and gone 35 years ago.

Now Saturday Night Live is back. They’ve recently even wheeled out Bill Murray of the original crew. Keeping Buddhist hours myself, I’d forgotten all about it. Saturday Night Live was one of those post-Sixties generational bonding things like McGovern, Doonesbury and smoking dope that I thought pretty much passed into the ozone when John Belushi and Andy Kaufman did in the early ‘80s, and now I find it has remained dormant like Norma Desmond, waiting, waiting - 30, 40 years alone in the night on Saturday - waiting for the call from Mr. DeMille.

What is fairly astonishing in this return of the ‘70s with its politicians and cultural effects is that it feels exactly the same. There are even gas lines and nervous cries that the end is near with Al Gore playing the role of Carl Sagan. Frank immediately calls for a 25% decrease in military spending and John Kerry calls for an FDR-style federalization of everything. It is like a strange M. Night Shyamalan movie; the sudden return of a former day with nothing in between; no Reagan, no Bush, not even a Clinton. In fact, I think there is a new TV show like that – a detective getting lost in the 70s like we are – featuring Michael Imperioli as a cop in a Fu Manchu mustache.

We have what I think of as a McGovern ethic up here in New England; an attitude we took when he ran for president against Richard Nixon in 1972 which gave us a sense of moral superiority in failure. George McGovern lost 49 states to one, the one being Massachusetts, but this total failure – virtually an abdication of political will at a critical moment - is always thought of as a great victory up here. We like to fail. It may make us irrelevant but we feel more special than grungy snow machine riders and hockey players with no front teeth and lipstick wearers and people who have babies.

When I was working as a volunteer for Wesley Clark in his primary campaign up here in New Hampshire in 2004 his state director said with glowing heart, “It’s just like George McGovern again.” I knew we were finished.

I’m not so certain as the main stream of the press that Obama will win this; it is too much like McGovern times.

Douglas MacKinnon, the press secretary for Bob Dole had some thoughts on this recently in the The New York Times.

“Why do Democrats sometimes lose when all indications are that they will coast to victory?” he asked. “One reason that has gained traction in certain quarters is that the people who control the Republican Party understand and respect their opponents. Republicans think Democrats are wrong, but Democrats think Republicans are stupid, and that’s why Democrats lose.”

Now it has pushed all the way back, as far as it can go; all the way back to Barney Frank, Saturday Night Live and the crew at Elaine’s, New York’s fashionable upper east side spot where the beautiful people of the 1970s would go to see and be seen. The extreme edge of esoteric liberal culture feels it is taking victory.

MacKinnon repeated a story of the movie critic Pauline Kael for The New Yorker, who in the face of Nixon crushing McGovern in the 1972 presidential election allegedly said, “How can he have won? Nobody I know voted for him.”

While always vehemently denied, he says, much of the mainstream news media is more comfortable with the mindset of the left and of Barack Obama.

MacKinnon also looks at the ugly side of this equation. Race is going to be a factor in this election, he says. How much, no one knows. A New York Times/CBS News poll gave some indication when it found out that “one-third of voters said they knew someone who would not vote for Mr. Obama because he is black.”

There is another aspect to this. I was in a group last week where we were asked how many people don’t wear seat belts. Only one raised the hand, but in this live-free-or-die state where it is legal not to wear seat belts, 45% do not. When there is a moral or ethical quality to a question asked in public people often take a complex, opaque, Jesuit approach in orienteering toward the truth. It might not make any difference if someone asks who are you going to vote for, Bill Clinton or Bob Dole? But when someone asks, who are you going to vote for, John McCain or Barack Obama, the question can be heard to have subtle intent or to imply at least in shade or degree: Would you vote for Barack Obama for President or are you a racist?

Here in northern New England where conspicuous display of political piety is part of our vanity and self inflation, there seems to be little enthusiasm for this race. Only two people have come to the door for Obama, one of them nasty, compared to 2004 when we had a constant stream of solicitors for weeks on end.

And 200 yards away in Vermont, the most liberal of all states, the conservative Republican governor, Jim Douglas, who reminds Bush of Bob Newhart, has raised $1.25 million in his reelection campaign while his Democratic challenger Gaye Symington has raised only one-third of that, $493,545.

Money talks. And up here it is saying something different than the pollsters are.
Posted by Bernie Quigley at 6:12 AM