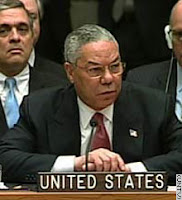 Obama should reject the Powell endorsement

Rose Kennedy is said to have asked at one point, “When are the nice people going to invite us over?” the phrase has a distinctive cadence for people of that realm. My mother likewise took the measure of people in the nice barometer, but it was late in her life and her important work was over. Nice meant not coarse, not vulgar or common. There had been a long history of that and now some success and they wanted people to act nice.

At the end of difficult and trying things you want something nice. You want the deaths in the house forgotten, the Depression, the swarming horde escaping the Famine and the diseases that wiped out entire blocks – the 100 who died to the one who survived as Pat Moynihan has written; the half of the family which died from tb and brown lung in the cotton mills, the suicides and murders and the chronic alcoholism which plagued the entire race; the rosaries, the mourning, the requiem masses; the scent of so many babies who didn’t make it past two and the silence of the dead which never went away.

At the end you want to forget all that. You want things to be nice. You want an Oldsmobile; a Hoover vacuum cleaner and a set of encyclopedias. You want Perry Como and Rosemary Clooney. Today she would want Peggy Noonan and Colin Powell. Today my mother would think they were nice and she would think that Barack Obama is nice too.

But nice has problems. Primarily, nice engenders cowardice. When all you want in a person’s character is the appearance of verisimilitude, you will readily sign on to the invasion of Iraq like Hillary, Bill and Joe Biden did, and like the 75% of Americans who followed their leadership. You will accept it pleasantly when a politician lies outright and without guile; bald face and direct as Colin Powell did when he presented phony evidence to the UN.

These are the nice people of today. What they lacked in their singular big career test – the Clintons, Biden and Powell and the others who submitted like Rusian peasants pulling their forelock to Bush, Rove, Wolfowitz, Douglas Feith and co. – was character. And they left the rest of us at the mercy of the horde.

This war in Iraq was accommodated and enabled by those who did not stand up when it was the time to stand up. This war came about because people like Al Gore stood up against it nine months too late and Hillary stood up against it a year too late when the market surveys began to turn and Biden after that when everybody else was beginning to stand up. And Bill Clinton in particular, who never stood up at all, ever.

And it happened because these people allowed it to happen when everyone knew even at the very beginning that it was a lie. Wolfowitz, Feith and George Bush depended on these people: They were their most important allies. They knew they would accommodate and appease and not start to complain until the going got rough.

It could have been stopped if one man – only one – had stood up. Someone brave like Walter Reuther who stood up on the wall facing the armed federal goons and opened his shirt and challenged them to fire their first shots into his chest. It could have been stopped if one man or woman instinctively snapped to attention and faced the opposition as Anwar Sadat did in his very last moment. Or even someone like Cyrus Vance who stood up and walked out of the room on Jimmy Carter’s crazy, fanciful and irresponsible foray into the desert. Or someone like Eliot Richardson, who refused the criminally disturbed orders of the Nixon administration.

Powell delivered a speech to the UN on February 5, 2003, to make the case for the war on Iraq by presenting U.S. intelligence that purported to prove that Saddam Hussein had weapons of mass destruction.

Powell showed slides alleging that Saddam had bioweapons labs mounted on trucks that would be almost impossible to find.

"It was anything but an intelligence document,” said Lawrence Wilkerson, Powell’s chief. “It was, as some people characterized it later, sort of a Chinese menu from which you could pick and choose."

What the country needed at the time was someone widely respected like Powell to say no and because he was so widely known and respected, it was Powell’s responsibility to do so. It was his greatest test. It was his moment of truth. But Cheney/Rove knew they could count on him to be their patsy and he was. Had he resigned his post he could have saved the day.

In that regard Powell holds some of the greatest responsibility for the tragedy of the last five years: He was perhaps the one man who could have changed direction. That he didn’t do so was a primary failure.

Powell could have run for president in 2004 if he had taken Wesley Clark’s position on the war at the beginning and if he had walked out to the room as Eliot Richardson and Vance under different circumstances. He would have won in a landslide and he would have been America’s first black president.

When the crisis moment came to decide to do the right thing or do what the boss said, Powell did the boss’s bidding.

Most people today don’t even remember that Powell is black, but that he crossed party lines to vote for Obama clearly brings it back.

I first supported Obama because he opposed the war in Iraq and I was reminded somewhat of Malcolm X by his clarity and presence. I say that in a good way. Because Malcolm, who came from the dark side of the Civil Rights movement, was one of those men who was not afraid to die even when he saw it coming. And like my mother, Malcolm had a way with words and divided his world as my mother did between the vulgar and the nice; Joe the Plumber and Peggy Noonan.

Malcolm called himself a “Field Negro.” But he had another name for those who found their way to the white man’s parlor and lived submissively there, trading loss of honor for social standing by doing “boss’s” bidding. And it wasn’t nice.
Posted by Bernie Quigley at 8:43 AM