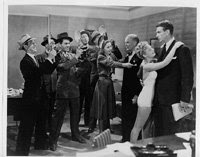 Palin-McCain ’08: How McCain Can Win

Watching last night’s debate I kept drifting back to good days before the Castro revolution when Friday night meant watching the fights on black and white TV with Daddy-o. The Cuban competitors were generally evenly matched and competent fighters who usually kept going the full 12 rounds. But close to round eight, the superior athlete began to ascend slightly over the other and would continue then to dominate to the end. Likewise, at about 10 o’clock last night, two-thirds of the way through, momentum began to shift from the unanticipated high pitch of mutual competence both candidates brought to the show.

That wasn’t what was expected. The viewing audience fully expected Sarah Palin to be sent from the arena very early on, banished from the lower forty altogether, put on her snow machine with her forty children and sent packing back to Alaska. But by 10 o’clock it was clear that the debaters were drawing even. She realized it and rose to crescendo with that simple grace and common Frank Capra elegance which brings a direct personal magnetism to people who work with their hands and hearts. Drawing even was all she needed to do to restore her karma and quite possibly to win the election for McCain.

And Biden seemed to realize it at the same time. He smiles almost all the time but it is a different smile than hers. It put my kids on edge and they asked about it. Hers is the smile of the good mother or teacher who is not ruffled by random and erratic behavior, but is used to it and amused by it. His is a paint-on smile, at times patronizing and with odd, suggestive little hand motions to the face, like a football coach sending secret signals to his team. Then it sinks unannounced to gloom. Biden’s smile began to sink to gloom at about 10 o’clock. The consequences began to dawn on him: If he didn’t win this race hands down as he expected he would and as he was expected to, he could single-handedly lose the election for Obama. By 10:30 he was all gloom.

The whole debate was about Sarah, said Peggy Noonan.

“She was the star. He was the second male lead, the good-natured best friend of the leading man,” she writes today in the Wall Street Journal.

One of the telling details came late in the debate when moderator Gwen Ifil asked both candidates what role they would play as vice president. Palin outlined the VP’s role as per the Constitution; the leader of the Senate. But she added that as this role was open to interpretation, perhaps as McCain’s vice president she would have an expanded role.

Biden’s response was vehement. The Constitution clearly outlines in narrow and specific terms the vice president’s task. Any other interpretation smacked of the Dark One, Bush’s VP, Dick Cheney.

I’ve been warning about free-floating management styles since William H. Whyte declared the death of the Protestant Ethic 50 years ago. But it is long gone in our country. Dropping talismans like habeas corpus is a symptom of its passing. It was gone before Bush or Reagan; probably since Kennedy, and it is not all bad. I accept this drift in structure and form as part of our populist development as we head into a new century with new parameters of labor, politics, culture and economy. Personally, I like the European system in which a president has a symbolic or cultural role and the prime minister does the work. That is basically what we have with Bush/Cheney; Bush in a symbolic role and Cheney doing the work. The problem with that is not inherent in the structure; it is inherent in competence or lack thereof in George Bush and Dick Cheney.

But such a structure might work well with McCain/Palin. John McCain is, after all, primarily a cultural figure; a war hero who holds the string of America’s tradition - possibly single-handedly - sustaining values and the heartland tradition; the faith of our fathers, back to Virginia where his ancestor was an adjutant to George Washington. He is a war hero. That is what he is good at and that is why people like him.

But from what I understand and what I have observed, he is not a particularly good manager and sustains one of those old-school offices where an elderly secretary in a hair bun runs the whole show from behind the curtain.

It is increasingly coming to the fore that Palin is a good manager and the more we see of her direct without malice or intervention from the press, the more it becomes apparent. Her general presentation last night suggested a natural manager.

Possibly the most important single event to affect America’s fate since victory in the Pacific occurred this week with the Wall Street bailout. Yesterday afternoon the phones were blocked in Congress and it was impossible to send an email to a Congressman. This is a sea change of unparallel proportions in our time and shows a refusal of citizens to accept the old ways. They want new ideas, new structures.

And they will want new people; people they can start afresh with. There has to be a great confluence of the people of Main Street who are angry at Wall Street and Washington with the huge crowd appearing at McCain rallies. Reports are that the crowds are there to see “Sarah” and when her speech is up and McCain comes out, the crowds start to thin.

It is beginning to sound like a script written by Capra; runs on the banks, Wall Street corruption, a weasel Congress, even the jaded, harping reporters at the city desk mocking the country bumpkin. And the people looking for a natural leader of simple faith from the heartland; a Longfellow Deeds leaving the pixilated valley in the Green Mountains to restore nature to the republic.

If ever there was such a figure it is Sarah Palin. Send her up first and walk behind. Bring her to the vice presidency as an intern and train her to full form. Bring in the best and brightest to work with her in committee to restore the heartland; Bloomberg from New York, Ed Rendell from Pennsylvania and Arnold Schwarzenegger before he gets depressed and leaves entirely for Austria.

Consider a long-term plan. And when the time comes, turn the reins over to her. This is McCain’s ticket and his only chance.
Posted by Bernie Quigley at 7:05 AM