Rumsfeld Out, Jim Webb In: The Mudcat Paradigm 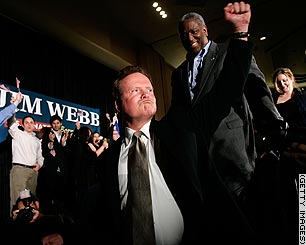 When most prognosticators look to the future they see flying cars and colonies on Mars. I see the Latin Mass and politicians in tents, smoking cigars on the lawns outside their public buildings. Today we see the end of the Millennium. The Apocalypse has passed. My old country people in the western hills of and no longer need to worry about being Left Behind in the war to jump start Armageddon, bringing in the Second American Century and Jesus too. The future is upon us and in many ways it resembles the distant past.

From its neocon conception, the war on was a War of Denial – its premise; we can invent history and a new century based on a New Jerusalem amidst oil sheiks and almost dead center in the middle of one billion Muslims who have never been our friends. After all, we are all Jews and Christians here in the Land of the Free, no? No wogs, frogs or macacas here.

And in the truest of orientations, Chicago, Houston and are not our centers. is our center. Think of it that way – make it happen that way - and the rising economic tide of and will just go away.

But we do not invent history. History invents us. Today the war is over. I’m not sure who won, but I know who lost: George W. Bush.

When I went to bed last night I was a little depressed listening to Joe Lieberman drone on as if in a trance about his victory, telling us again how much he thanks God and quoting the Psalms and letting us know, don’t you know, that he, this most expedient and uncertain of all post-war politicians, keeps the Sabbath.

But as Wesley Clark pointed out in a dramatic political ad in : “Joe Lieberman introduced the resolution authorizing the War in . That was a mistake. Joe Lieberman voted for that resolution without asking the tough questions. That was also a mistake. And now, three and a half years into a failing mission in , Joe Lieberman can't seem to say we should change the course. And that's a REAL mistake. Re-elect Joe Lieberman? Well, there's a word for it. ‘Mistake.’"

In the simple country church I grew up in we took our guidance from the Son. As I recall, the idea was that the things of the Father were not those of Caesar, and perhaps there was a special place in the Everworld for those who took the Lord’s name and forged it to their swords.

But it was good to see it end as it began. When Lieberman demanded a recount in six years ago, standing behind Al Gore whose poor judgment brought him out of oblivion in the first place, The New York Times took an interesting tack. They brought in Dr. John E. Mack, Harvard’s most famous and infamous psychiatrist, whose clever mind converged alien dreams and all the daemons of the Unconscious. Mack said this about the Florida Recount: The Trickster is at hand. The Trickster brings turmoil and change to a world which doesn’t want to change. But so it has.

Late last night the venerables at CBS were asked who they thought the big losers were in this election. One said he thought Senator John Kerry's chances for 08 were weakened by his unfortunate comments a few days ago. E.J. Dionne Jr. of The Washington Post commented on Senator Clinton, saying she was actually boring and now that her campaign for President has officially started, she would be seen as a poor substitute for Elvis One. It is something we will experience increasingly in the next two years.

And that could pass now as well.

We are at a classic political turning, shifting politics and culture from third to fourth generations. The "turnings" are dangerous links between smaller historical periods. We began to see the positive rise in the last election, 2004. Here in General Clark and Howard Dean represented something entirely new to politics which had no prelude in the earlier three generations since 1946. But when the results were in, the mainstream candidates and the themes of the past dominated.

Today the "new force" is stronger and the Democrats have taken the House and possibly the Senate. But the most important observation of the venerables (Katie Couric’s) was that these new Democrats are in opposition to the old Democrats. They are cut of an entirely different cloth than the old Democrats. They are moderates. Many of them are veterans and some veterans of the war. Most are heartland people; people of the church supper and the patriotic main street parade. Many of them oppose contentious issues of the left like abortion and gay marriage and seek party cooperation and good management.

For the first time since Ronald Reagan rose to high office, Democrats have begun to appeal to the South and the . In the end, these new Democrats could replace the old Democrats. And if they wish to ever regain prominence in national politics, they must.

When Mark Warner ran for Governor of Virginia he first established this model for bringing Democrats in the South back to their traditional party with the help of Steve Jarding and Dave “Mudcat” Saunders. They have written a book about their strategy called, Foxes in the Henhouse: How the Republicans Stole the South and the Heartland and What the Democrats Must Do to Run 'em Out.

In a recent interview in the Augusta Free Press, Jarding said, "I don't think you necessarily have to be from the South to win in the South. I think if you've got the right message, I believe very strongly that a leader can go anywhere and rally people to his or her side.”

"Having said that, there are people,” he continued, “if you look at history, whether it's Jimmy Carter or Bill Clinton, there will be people who say that we have to go with somebody from the South. If that indeed is an important criterion, it helps potentially two people - John Edwards and Wes Clark, Edwards being from and Clark from .”

He thinks Edwards might be more on the outside looking in as far as his chance to top the ticket in '08 is concerned.

"Edwards lost in 2004 - so it's almost hard for him to say, I can win in the South. He couldn't carry his own state in '04. Another issue for him is the Des Moines Register poll had him at 30 percent - which is probably a high-water mark for him. It's going to be hard for him, particularly if Hillary's in, to get much higher than that.”

"He can make the case, one, that he's from the South, two, if the Democrats try to convince themselves that the '08 election is about the economy, they're crazy, because it's going to be about the war. It's not going well, it's not going to change - at least there's not anything in the cards that suggests that it's going to turn around, because Bush is stubbornly saying that he's going to stay the course.

"So I think the war is going to be the top issue - and here you have a very successful general in Wes Clark, and I think the upside to is that he's Southern, and that he's a military guy.”

In 2008, this "new force" could well succeed. Warner, Jarding and Mudcat Saunders have opened the paradigm for the fourth generation of post-war politics. Jarding and Saunders next went to work for Jim Webb and now Saunders is working for John Edwards.

Alan Greenspan made the important observation last spring that both mainstream political parties are polarized, and have left behind the 80% of mainstream voters. Time is right for a third party to speak to that center, he said. But that third force could just as easily develop within one of the two existing parties and the Mudcat Paradigm could now prevail as a victorious new direction for the Democrats.

Since the 2004 primaries, the field of potential candidates for President has narrowed - Howard Dean is out, Warner is out, Kerry is possibly out, Senator Clinton is iffy. The moderate new Democrats could shift emphasis and Congressional support to John Edwards and General Clark.

This would be, in effect, a red-state strategy for the Democrats. Kathleen Sebelius, Governor of Kansas, who was voted with Warner to be chief of one of the best governed states, would be a good choice to expand the Mudcat Paradigm concept from the Old Dominion to the mid states and the heartland of the .

The Mudcat Paradigm should work in all red states. Such "Southern based" politics would be welcome here in as well, generally considered a red state in a sea of blue.

Indeed, in the tide has already turned. Both our Republican Representatives were replaced yesterday by Democrats and one of our new Reps, Carol Shea-Porter, a military wife and educator, well personifies the values of the new Democrats. And John Lynch, our Democratic Governor, who like Warner seeks bipartisan cooperation above all and brings management values and excellence to a party which sorely needs it, was reelected yesterday with an unprecedented margin of 77%.
Posted by Bernie Quigley at 7:55 AM

"Mudcat" has proven that Democrats can win by appealing to traditional values and economic fairness.