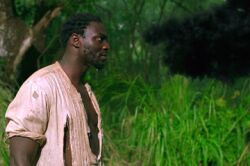 In Buddhist lore, the Sidhartha’s first temptation was Mara – an illusion of the personality which Jungians call the Shadow. The Shadow contains the unexpressed contents of the person – Mr. Eko, the drug lord and his “brother” Yemi, the priest, are one. 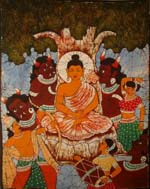 As it is throughout this show, there are two levels. There is the actual story of Eko and Yemi as brothers, and there is the underlying story of the two faces of Eko, light and dark - one the drug lord, one the priest. The black smoke on the island is similar to Mara, the first illusion and temptation of Buddha. Mara sends storms, hail, rain as weapons to shake Sidhartha from his quiet under the Bodhi tree. This image courtesy of Exotic India which is linked on my other site - Buddha wards off Mara. Note: The current movie Mission Impossible 3 is directed by J.J. Abrams, executive producer of Lost. The two have similarities; in MI3, Tom Cruise tortures his nemisis, the the tables flip and the nemisis tortures Tom Cruise. This is the situation with Jack and Ben Linus in Lost. Ben is the Shadow of Jack (they have the same "wife" - in Jungian terms, Anima) and they torture one another as the Shadow "tortures" the individual. But in an interview attached to the IM3 DVD, Abrams comments that the movie starts in Rome and ends in China. That is precisely the path of Awakening in our times and in Lost; it represents a shift in psychic or spiritual orientation from that from Rome (Yemi and Mr. Eko as Roman Catholic priests) in the last two millenia, to those from the East; Taoism, Tibetan Buddhism, Zen, with Jungian insights - it is the Dharma path ( RE Jung: . . . for example, when Sawyer and Kate swim underwater, they find another couple underwater - it is their Unconscious nature and their destiny). See Quigley in Exile. Note as well that it is a rabbit's foot - a talisman - which unites the three continents and the millenia as well.
Posted by Bernie Quigley at 5:28 PM