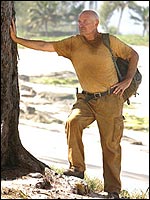 In this last episode of the season, Mr. Eko is buried, but John Locke reveals that in the explosion Mr. Eko's Jesus stick landed in his hand. Mr. Eko "passes the baton" to John Locke, who also found Mr. Eko's cross. At the burial, John Locke is struck by a quote from John's gospel on the Jesus stick which says, "Look to the North." When asked about the smoke which appears to have killed Mr. Eko, John Locke says, "maybe it is what brought us here." The smoke thing way resembles the visionary Princess Mononoke, my first impression when I first saw Lost. In Mayazaki's masterpiece the swirling force in the jungle suggests the "vegitation spirit" which Sir Isaac Newton wrote over a million manuscript words about as he was searching the alchemist vision - this the Green Man or the Earth Mother - the animated spirit of the earth which is prominent in early English culture and is pronounced in Tolkein, and also in Japan's Ainu indegeneous culture. Likewise, in Lost, the smoke can be seen as the spirit of nature. In Princess Mononoke, one of the characters refers to the forest after it had been occupied by the industrial Queen, saying it no longer has spirit or chi. As in most of Mayazaki's masterful tales, the earth has chi; the earth has an Unconscious - likewise, the Lost island. For more on Lost, see Quigley in Exile.
Posted by Bernie Quigley at 3:41 PM