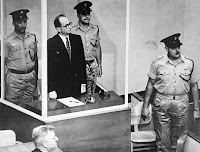 Kill the Jews wherever you find them. This pleases God, history and religion. – Haj Amin al-Husseini. The Mufti of Jerusalem

It might be seen in hindsight that in Desert Storm, George H.W. Bush was in fact bringing a final end to WW II, as Saddam Hussein’s Ba’ath Party was an organism directly related to the Nazi movement, mentored by the Third Reich and modeled on its terror tactics. It hindsight it seemed odd that H.W., honored veteran of that conflict, didn't end it there but left it standing, leaving the dirty deed to the next generation.

Likewise below, at Temple Mount, where the Grand Mufti of Jerusalem was first mentored by Adolf Eichmann. As Saddam and George W. Bush were second generation agents to their political parties and purpose, so was the Grand Mufti’s nephew, Yasser Arafat, left to finish the work hatched literally in Hitler’s ovens by his uncle who was based in Berlin from 1942 to 1944. “Allah in heaven, Hitler on earth,” was the popular Arab phrase at the time.

The Clintons come in here as second generation agents as well. Documentation from the Nuremberg and Eichmann trials indicates that the Nazi Germany SS helped finance al-Husseini’s efforts in the 1936-39 revolt in Palestine. Adolf Eichmann actually visited Palestine and met with al-Husseini at that time and subsequently maintained regular contact with him later in Berlin. That that which was begun by Nazi collaborator Haj Amin Al-Husseini, the Grand Mufti of Jerusalem and advanced by Eichmann was finally secured by an American President as the Oslo Accords in 1993 is stunning. That his wife is President Obama’s Secretary of State today is an abomination.

“These accords turned the leader of a terrorist gang, Yasser Arafat, into a supposed cultured leader worthy of joining the society of nations,” said Uzi Landau, Israel’s Minister of National Infrastructure, who recently has called for Israel to cancel the Oslo Accords.
Posted by Bernie Quigley at 5:27 AM