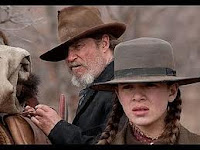 Two stars are born this season, Mattie Ross and Rooster Cogburn, westerners travelling in righteous vengeance. She with the “author of all things” watching over her and a fine horse. He with true grit. The Coen Brothers in “True Grit,” this the greatest ever movie, return us to ourselves in the western epic we last visited in 1968 after a 40-some year skywalk. And in our time their players, Mattie Ross and Rooster Cogburn, come to resemble two new and rising stars on the political scene, Elizabeth Warren and Rick Perry, governor of Texas. In Perry, Andrew Jackson has found his avatar. In Warren, Rachel Maddow has found her anti-Palin.

Warren says she will now consider running for senate in Massachusetts. I hope she does. Interesting, we have now two formidable politicos come to us from the west: Mitt Romney, former Governor of Massachusetts, and now John Wesley’s own Oklahoman grandmother, Elizabeth Warren, whose old-rugged-cross character and diligent work ethic suggests her to be Mattie Ross incarnate. We need this badly in New England. Potentially, we are finally leaving Europe behind as Emerson demanded. I’d like to see Warren look ahead to bigger goals like governor of Massachusetts, but this will do. I don’t see that Scott Brown will be that much of a problem. He has not made much of an impression. His great gift seems to be the ability to drive a truck. I’ve tried it. It’s not that hard.

Perry may have seen his first vital moment on the national scale this past Thursday with an essay in the Washington Post signed with South Carolina governor Nikki Haley on the debt crisis. He used the phrase “cut, cap and balance.” It has since become a mantra. It will identify the rising paradigm in conservative politics and Rick Perry will be identified with it. The states’ rights perspective in now imbedded in conservative politics. Every candidate in this race including Jon Huntsman, Jr. and Mitt Romney, references states rights as Rudy Giuliani did up here at Dartmouth College last Friday when he told a college audience that what the next president should do to cut the size of federal government is “to move functions of the federal government down to the state and local level, which are better at delivering what states and cities need.” This is boilerplate Tea Party.

Should be recalled that the “true grit” feature in American politics – the Jacksonian, heartland uprising which evolved into the Tea Party – was started on the left by the tobacco-chewing, Glock-toting Scotch-Irish Virginian Jim Webb, writer, warrior, former Secretary of the Navy and currently Virginia’s Senator. John McCain had the good literary sense to pull in the Alaskan Governor Sarah Palin to advance the theme.

Andrew Jackson liberated the American frontier and heartland. It brought the end of the Colonial period and the domination of American politics by the Eastern colonials. To regain influence, the northeast had to go country as well (thus the funny whiskers and silly hat on Abraham Lincoln). Today, the agricultural heartland has arrived in America as a political influence, finally gaining its birthright. The Democrats will have to do the same today as the Republicans did back then to gain influence: go country.

Their new Okie star Warren is a beginning. Look to Montana governor Brian Schweitzer and farmer/senator Jon Tester of Montana to advance. Look maybe to more from Jim Webb.
Posted by Bernie Quigley at 6:49 AM