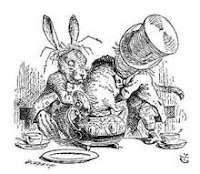 Replace England with Tibet on the Security Council: Requiem for the Eggman

In 1871 when Alice in Wonderland was written, England had come across the world as if out of nowhere; as if out of a rabbit hole. But Nelson was long dead and Trafalgar was 66 years in hindsight. To a visionary like Lewis Carroll the end could already have been in sight.

1857, the year of The Indian Mutiny, was perhaps a decisive moment; the year of returning. The Queen was growing old and irascible and the map would quickly start to shrink. Carroll’s Eggman would be the last man of Empire; high on the wall but facing an imminent fall.

But as with the Big Three in Detroit, these things, the Big Symbols, get subsidized and survive in body if not in spirit well beyond their time. When this fair Queen passes on - Carroll’s Earth Mother Incarnate who’s arbitrary right to cut off the heads has long been stripped - the Brits might ask if it is not finally time to end the subsidy.

The resolute valor that was Elizabeth I and Lord Nelson - or even T.E. Lawrence or even John Lennon - was the same indomitable spirit which wakened American and the Enlightenment. But there was little trace of it this week when Gordon Brown, who vacations annually at Nantucket with the Clinton crowd and singers and bit actors from the Sixties, asked China to give money to the International Monetary Fund, in return for which Beijing would expect an increase in its voting share.

Robert Barnett, who directs the Modern Tibetan Studies Program at Columbia, writes this week in The New York Times that there is speculation that a trade-off for this arrangement involved a major shift in the British position on Tibet, whose leading representatives in exile this weekend called on their leader, the Dalai Lama, to stop sending envoys to Beijing — bringing the faltering talks between China and the exiles to a standstill.

“The exiles’ decision followed an announcement on Oct. 29 by David Miliband, the British foreign secretary, that after almost a century of recognizing Tibet as an autonomous entity, Britain had changed its mind,” writes Barnett. “Mr. Miliband said that Britain had decided to recognize Tibet as part of the People’s Republic of China. He even apologized that Britain had not done so earlier.”

Until that day, the British had described Tibet as autonomous, with China having a “special position” there. Mr. Miliband described the British position as an anachronism and a colonial legacy.

Not since, Francis Younghusband’s invasion of Tibet in 1903, in which 700 Buddhist monks were gunned down and left to die, has England shown such Imperial detachment.

As he says, Britain’s change of heart risks tearing up a historical record that frames the international order and could provide the basis for resolving China’s dispute with Tibet.

At the beginning of the war on Iraq New York Times columnist Tom Friedman asked that France be thrown off the UN Security Council to be replaced by India. I felt he had a sub agenda and was hoping for a few million Indian “Gurkhas” – England’s loyal Nepalese troops – to fight America’s battles in the Middle East. He was right at least to suggest that America’s interests, as we enter the new century, lie across the Pacific rather than the Atlantic. Likewise, it is questionable today what use England brings to the world when a dormouse like Gordon Brown can arbitrarily seal the fate of ancient peoples like Tibetans.

It is unlikely that England or France be thrown off the Security Council. But the time has come, as Carroll’s Walrus said, to think of many things. And it has been 40 years since John Lennon claimed the mantle of Eggman, the last man of Empire.

We need a new Council, not a new Empire. Something approximating the G-20 economic group which met in Washington just recently. And it should find its center in someplace central to the equal and opposite forces awakening in the world today; Detroit maybe or up by the Sault Ste. Marie on the Great Lakes, which borders Michigan and Canada. We need a council which looks East, West, South and to the Great White North. But especially one today which looks across the Pacific.

As global economy raises the East, India and China could well be great binary forces in a future not far ahead. Tibet could form a benign center between them and a buffering zone to temper their ambitions. And in the last 30 years, its exiled leader, the Dalai Lama, has brought awakening and enlightenment to the world well beyond Tibet’s borders. Much as England did centuries back now, long before the fall.
Posted by Bernie Quigley at 6:52 AM