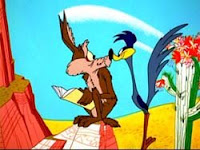 If Obama innocently brought in Senator Clinton for Secretary of State he is so out there where the buses don’t run that he will have to hire Dick Morris to tell him what to do.

But I don’t think he is. Obama is a Trickster. He knows the Clintons are hustlers better than anyone and like the Road Runner he enjoys the chase. He has the inner voice which assures him that he can be caught, he can be stopped . . . someday maybe his dance can be stopped. But not today. And not by the likes of the Clintons.

In restoring the Democratic Party, Obama’s first Herculean task is cleaning out the stables. In this environment that means managing the Clintons. He got some good laughs during the campaign when he said he looks forward to taking her advice. He understands territory and place. The Clintons want and expect to dominate. But they cannot and will not out stage Obama.

Putting Hillary as Secretary of State is an insult to Condi Rice, considered formidable to her task by any standard, and the entire league of diplomatic corp old school gentry who served out of a sense of duty. And on face value, the worst thing about Senator Clinton in this position is that she is like the man in the cell phone commercial who tries to get a room in a motel and is told it is a dead zone. It’s ok, he says, he has his army of technicians with him. But Hillary’s is an army of lobbyists who have her and her husband in their pocket for almost two decades now – a group Obama promised to avoid.

But Secretary of State may be a very good place for the Clintons, and as Peggy Noonan says, they always go together. I was told by a perceptive retired Foreign Service officer, Obama intends to be his own Secretary of State. Hillary will be understudy. She won’t like that. Obama knows that. From the Trickster point of view, it is a masterful tack.

Bringing Hillary into the Obama cabinet is something like having The Beatles agree to have Perry Como open for them on tour after heavy lobbying by his agent. She and her husband and his fifty gold watches will be absurdly out of place with this smart new generation.

But that is the Elvis curse. He/they refuse to leave the building.
Posted by Bernie Quigley at 3:52 AM