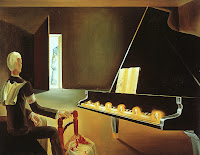 John Lennon and the Egg Man - this is the work I do on Quigley in Exile and in the manuscript The Age of Thomas which relates to both The Gospel of Thomas and Thomas Anderson, Neo in The Matrix; primarily art analysis which was my first occupation and not characteristic of this journal which primarily lists my essays at The Hill - political writing has always been secondary to my life and I only got back into it recently in opposition to the war on Iraq. I hate politics but am endlessly grateful for The Hill for including my thoughts and perspectives.

But for the few who might be interested, this is part of an analysis I've been working on for 15 years on the life passage of John Lennon as an artist and generational hero which might actually be called in Mircea Iliade's characterization of things a shaman; not as a social figure or a political figure, although his essential artistic work bleeds into the culture with long-term effect as an awakening myth does. My thoughts on this are generally recorded at Unus Mundus, an on-line forum hosted by Remo Roth, a Swiss Jungian depth psychologist and colleague of Marie Louis von Franz.

"Eggman" enigma solved at the DMV

Whenever I have to go the the Department of Motor Vehicles (DMV) I enter a state of trance of some kind or detachment. Questions come up that seem unanswerable and processes unsolvable, creating a koan situation and sending the mind in exile to more pleasant pastures. I was there today with one of my sons to take the test for his drivers license and while we were waiting in line I solved an enigma that I have been thinking about for about 13 years - it just popped in my head when I was looking at a kid who looked like Kurt Cobain. The answer is incredibly simple. I'd been thinking about John Lennon's tune "I am the Eggman" and I had put together that as the song begins with the phrase "I am He" - and continues with "I am the Eggman, I am the Walrus," I understood it to be a reference to the Upanishads and other Eastern texts, which use the phrase "I am he" followed by "I am the Atman. I am the Brahmin." It refers to the individual consciousness as an individual coming to the realization that she or he shares consciousness with others and everyone and everything. So I felt John was cloaking this in comic imagery from Lewis Carroll (Walrus was in Through the Looking Glass if I recall correctly.).

I'd also written a lot about links between Lennon and Salvador Dali and Magritte; Lennon can be seen as fulfilling "prophecy" of Magritte and Dali - I proposed that Dali and Lennon went into the same "room" in the Unconsious and some how connected there through the talisman of the white grand piano. But waiting in line I realized that when Lennon said "I am the Eggman" he was likely refering to a painting of Dali's about the New Man being observed by "Geopolitical Child" - virtually the global man - the Aquarian - climbing out of an egg and waking in the new world. Lennon was an art student and would quite likely be familiar with the work. He encountered Dali after The Beatles and Dali was hot to do some projects with him but Lennon demured. This is an important painting by Dali and lived and grew in the Unconscious for decades before it went to canvas.

Here are some illustrations.

The white grand piano became the icon of Lennon; it is where he composed his anthem, "Imagine." 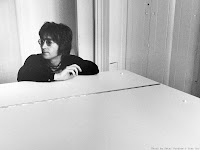 Dali painted Grand Pianos for decades, pulling images from the Unconscious. A musical instrument like a piano or violin is often conduit to the Unconscious - the images of the dead in Dali's work or anyone's can be understood in Jung terms to be the Unconscious: 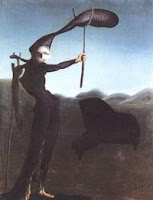 This one - Partial Hallucination - 1931 has a door open to the Conscious; most dreamers dream of a door opening to the Unconscious; Dali goes the other way - the Six Sculls are present; a common motif in art, dreams lit (See Lone Ranger - Six dead lawmen - one rises form the dead, the Unconscious; see Black Elk's vision - the six represent the yang half of human consciousnes as for example represented in the zodiac; six male signs, six female).

This one very elegant; the tree of life, and the curing waters of Aquarius coming from the Unconscious. Titled, "Necrophilic Fountain" - Dali and his Surrealist group gave strange names to freak out the conventional religionists and the uninitited.

"Invisible Man" in 1932 - a white grand piano made out of food - again, the artist lives in the "room" of the Unconscious with only a window to the Conscious world:

There are more; there are many. Magritte, in 1964, did this, "Son of Man" - from Book of Daniel, signifying the Aquarian would be marked by a green apple - the sign of The Beatles Apple Corp. 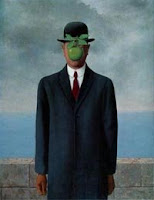 Another in this series as the Knight and Tower (1932) develop features - light coming into the light of day - into Consciousness:

The series ends in 1943 with this painting, Poetry in America. The Tower has full come into Consciousness - It has a clock where the "eye" of the sacred phallus tower would have been; the map hanging from it is the leftover of a egg which has hatched from a picture of significance called Geopolitical Child; a picture of a man - New Geopolitical Man - climbing out of an egg.

This is Poetry in America:

Notice in this picture the Knight from the early picture is now a naked man sitting forelorn in the left of frame. His task is completed; he has brought his event from the Unconscious and has lost his cosmic nature and is now only a man. But it does indicate that all these pictures are connected.

And this is what they are connected to: paintings of a egg about to awaken with new life in the world. Here are two of Dali's world/egg pictures, the second, the important Geopolitical New Man - Eggman.

This is Baby Map of the World:

And this is Geopoliticus Child Watching the Birth of the New Man. 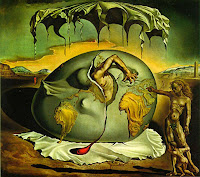 This is the Eggman. This is what Lennon referred to when he said, "I am the Eggman" - I am Geopolitical New Man; I am the new man of the world come to take away the old - "Imagine there's no heaven . . . no country . . . no religion too"; I am Shiva the Destroyer; I am Brahma, come to introvert and awaken the matrix.

If you go back to look at Poetry of America, the one with the dancers, you can see the content of the Egg. Notice both pictures have a cloth beneath them and something is pouring onto it. It is oil and Coke in Poetry in America. It is blood in Geopoliticus Child. This identifies the pictures as a connected sequence. In Poetry in America we can see that the dancer on the right has a candle in his head - he is "the Enlightened One" - we can see that New Man is intended to be the Enlightened One. Notice as well that the Enlightened One - dancer on the right - has a hole in his right chest - it is the wound where the Christ was hit with the spear; New Man is the "second Christ" the Aquarian - it is Eggman.

Late in life, in pain, Lennon say, "I was the Walrus (Brahma) but now I'm John."

Tibetan Buddhists say after Enlightenment, life is a broken glass. He never smiled again for the cameras after India.

For more on this stuff see Quigley in Exile and The Age of Thomas linked above.

For more on Lennon's journey see: Free as a Bird: John Lennon's Unfinished Journey.
Posted by Bernie Quigley at 7:02 AM

Thanks for the informative information - I enjoyed reading it! I always enjoy this blog. :) Cheers, www.mother-giving-birth-video.com

It seems to me it is very good idea. Completely with you I will agree.