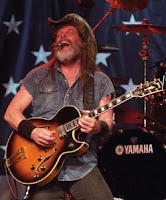 Hillary and The Nuge

I can’t believe Obama would be so stupid as to appoint Hillary Clinton to Secretary of State and I think he’s only sending this out through his probe droids to create the appearance of fairness. Also, because like so many people he is afraid of her. (That terrifying carnival laugh . . . .) But I hope he remembers that first law of politics, which is the first lesson of everything. That thing in Newtonian or Buddhist law or something which says a force creates its equal and opposite counter force.

According to this law, if Obama appoints Hillary, the Republicans will probably come back with Ted Nugent in 2012. Those of us who have had the great good luck to have lived in Michigan know well The Nuge. We have seen the bumper stickers telling us to teach our kids to hunt so they can eat. I’m kind of afraid of The Nuge because he swears a lot and because he makes “ . . . Fedzilla punks squirm and turn into a puddle of sweat and drool . . . .” I’m not sure what Fedzilla punks are and hope I’m not one. But he has a more pleasant smile than Hillary’s and in a toss up I’d probably go with him.

As reported in The New York Times, Uncle Ted speaks out this week in Human Events:

There are really only four things I have a strong aversion to: unloaded guns, dull knives, banjos, and Republicans in Name Only (RINOs) . . .

RINOs are Fedzilla punks who feign support for conservative principles only when it serves their political interest. RINOs are also known for their moderate positions such as supporting tax increases, federal "bailouts," "comprehensive immigration reform," advocating more counterproductive gun control that guarantee more innocent victims, opposing the death penalty, and growing and sustaining Fedzilla and all its toxic mongrels by going along with the liberals. RINOs have forgotten President Ronald Maximus Regan’s admonition that government is the problem, not the solution …

My specialty is making Fedzilla punks squirm and turn into a puddle of sweat and drool. Therefore, in the spirit of famous butt kickers Generals Chesty Puller and George Patton, I say we launch an attack on all fronts. Uncle Ted hereby declares it is open season on RINOs. No bag limits or permits required. Conservative ideas, arguments and votes are the weapons we will use.
Posted by Bernie Quigley at 5:21 AM