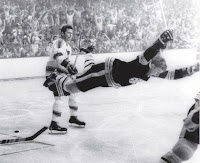 The Way of the Hockey Mom: Sarah Palin Doesn’t Blink


There is an old Zen Buddhist parable about a monk watching a young Samurai in a duel. A child is standing nearby with a large scary mask hanging over his shoulder. The Samurai notices the child just before he dispatches his opponent. He turns to the monk with pride after his battle but the monk says in disgust, “You’ll never be a Samurai. You saw the mask before you saw the child.”

It was the first thing to come to my mind when I saw Sarah Palin, McCain’s Vice Presidential pick, take the podium when he announced her candidacy. She sees the child before she sees the mask. She sees the awakening moment and steps forward to the duty at hand before she see experiences the fear that the new encounter will bring. She is fearless.

In her ABC interview yesterday she said she had no doubts in her ability to be Vice President and she answered McCain directly when he asked her.

“I answered him yes, because I have the confidence in that readiness and knowing that you can’t blink,” Ms. Palin told Charles Gibson, the ABC reporter. “You have to be wired in a way of being so committed to the mission, the mission that we’re on, reform of this country and victory in the war.”

The zen child/mask barometer has always been close to my mind in measuring politicians. The only one in my lifetime who measured 100% Child, 0% Mask was Dwight Eisenhower. When he said something he generally meant what he said. We might have left the Child behind altogether in decades past and been living behind a series of Masks ever since. So many masks, so little time.

There was a shot of fear came across the bow when Palin talked last night of war with Russia. But what she did was clearly enunciate, without threat or intimidation, stated American policy with Russia. It is a policy initiated by President Clinton and Vice President Al Gore in 1997, but no one seemed to notice at the time that the object of this policy was war with Russia. The ascending concerns in the Democratic Party back then were gay marriage, dot.com stocks promising to rise stocks to 35,000 and the madcap antics of the Clintons.

That is the way of the Samurai but here in the north country of New Hampshire there is a secret cult which Sarah Palin and I both belong to that is the closest thing on this continent to the Tao path of the Samurai. Anyone who recalls with religious devotion seeing Cassie Campbell win the Olympic gold in 2002 or the almost 40-year-old Dougie Gilmore crawl off the ice on his hands and knees in his final game, or Bobby Orr’s scoring the Stanley Cup’s winning goal against the St. Louis Blues while airborne 40 seconds into overtime will understand.