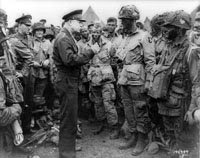 Twice the name of Dwight Eisenhower hovered over the first Presidential debate, with John McCain emphasizing the middle name – David - of the man traditionally referred to as Ike, somberly using his full and formal name to bring gravitas to the proceedings and express the awe he feels for the man who brought victory in the Second World War. McCain would return accountability to Washington he said, citing Eisenhower on the eve of the Normandy Invasion, for example.

His presentation was of the warrior mythos; the soldier, the veteran and the victory which if eluded in war would turn the heart dark, blacken the flag and spoil the village. It comes from the heart of darkness McCain himself was visited to as a POW in Vietnam. It is still unfinished in his mind. And his presence on the stage last night gives evidence that that moment – 1967 to 1973 when McCain was held prisoner – is likewise still unresolved in the hearts and minds of America. That moment is still this moment.

McCain is the old soldier to whom the varied ways of the warrior are one passage over the centuries, from Yorktown to Bull Run and Cemetery Ridge, from Ardennes to Normandy and from Khe Sahn to Basra; petals lightly falling. It is auspicious that he admires Eisenhower, because Eisenhower’s management skills were prodigious. Hopefully, it is that which McCain admires about Eisenhower.

But I think not. McCain lit up last night when it came time to talk about war abroad. He likes war and still hopes to meet the 93-year old novelist Herman Wouk, who wrote the popular romance, The Winds of War, before he dies. But he had virtually nothing to contribute to the discussion about life here at home, except the 3 x 5 card he still keeps in his breast pocket from the small government period about “cutting waste.”

There is a historic photo of Eisenhower on the morning of the invasion of France talking with a singular American marine in combat kit and darkened face. Eisenhower appears in the photo almost fatherly to a brave son about to face the crucible of life and death which would determine the fate of the world for the next 50 years in just the next few hours ahead. One could only imagine what Eisenhower was saying to him and the photo is composed to make you think about that. Maybe they were talking about the Constitution as George H. W. Bush liked to think about floating on a raft in the Pacific. Maybe something prayerful, like the simple faith of his Virginia tradition which sustained McCain as a POW.

In fact, Eisenhower and the marine were talking about fly fishing.

It is that detachment which won the war in Europe. Eisenhower had no desire to be warrior or President. He had not much interest in doing anything, it is reported in one of his biographies, except playing football. He was simply so good at tasks that became assigned to him that he rose to the top of his profession. Eisenhower put the world back together after others – diplomats, philosophers, strivers . . . warriors - broke it. Secretary of Defense Robert Gates today might bring a very, very minor comparison.

And if lineage is any indication, I don’t think McCain can take much sustenance from the fact that John Eisenhower, son of Dwight, a life-long Republican, a retired military officer and the author of several books of military history (including one on Ike), left the Republican party in 2004 to support John Kerry citing the “ . . . current administration's decision to invade Iraq unilaterally.” Republican Party leadership confused confident leadership with hubris and arrogance, he told the Manchester Union.

“The fact is that today's ‘Republican’ Party is one with which I am totally unfamiliar,” he said.

And it makes matters worse when Susan Eisenhower, daughter of John and grand daughter of Ike, another life-long Republican, has done the same this year to actively support Barack Obama.

“We are disliked overseas and feel insecure at home,” she wrote in the Washington Post. “We watch as our federal budget hemorrhages red ink and our civil liberties are eroded. Crises in energy, health care and education threaten our way of life and our ability to compete internationally. There are also the issues of a costly, unpopular war; a long-neglected infrastructure; and an aging and increasingly needy population.”

McCain wants to be the warrior’s President. But I can’t think of any time in our history that we have ever elected a warrior to be President just because he was a warrior. The election of Ulysses S. Grant in 1869 is the closest. Although the great and necessary soldier, he was not a great public manager and is considered one of the worst Presidents ever. His Presidency was one long victory march lasting almost ten years.

That’s what McCain wants. He wants his Presidency to be a victory march for Vietnam, for Basra and Baghdad and Afghanistan and Pakistan and Russia and all the places since Yalta where he and we have felt somehow unfinished. It is a personal McCain obsession and a national obsession and it borders on the edge of the pathological.

As one who watched the planes go up 120 mile south of where McCain was held prisoner, I’d be reassured to see a reference to Grant’s brilliant Autobiography, rather than to the make believe war of Herman Wouk. I guess Tolstoy’s Sevastopol or Hemingway’s A Farewell to Alms would be too much of a reach.

And I’d like to see him taking advice from someone other than his perennially strange and nervous side kick, Lindsey Graham, the Senator from South Carolina. If there was a dark corner in the veterans hall where Goth soldiers with black fingernail polish, fuchsia hair, body piercings and torn Marylyn Manson shirts gathered, that’s where you’d find Lindsay. He was among the first to bring the notion from the edge of the occult that a good war would help the economy and bring confidence to the country. It would get us over the “Vietnam syndrome.” He was there everywhere at the beginning comparing the invasion of Iraq to the invasion of Normandy and declaring every aspect of the misconceived adventure to be the equivalent to World War II.

It was like the flip side of the John Lennon anthem, Imagine: Imagine warfare, it’s easy if you try, no hell below us, above us only sky.

If you just went over there someplace and blew some stuff up, had a war, then came back and had a victory parade it would be the same as World War II. Only the criminally insane could actually believe that. But that was fully the conceptualization of the Iraq invasion at the beginning of the Bush administration.

World War II and the Civil War were wars of survival. Eisenhower and Grant were heroes because they saved our lives and livelihoods. They saved our culture. They created our culture. That is why they are celebrated, because when the war was over we were still alive and alive thanks to them.

It is the essential flaw in the McCain candidacy and it casts sadness on this very decent man and his very honorable public life. He has come to be seen as the savior of something that cannot be saved; the redeemer of something that cannot be redeemed; the fixer of a hurt in the soul which darkens the heart and blackens the flag and will never go away.
Posted by Bernie Quigley at 12:25 PM