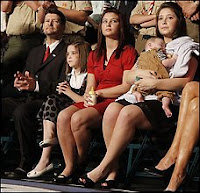 Peggy Noonan has long been one of my favorite writers, able to see around the corner when systemic transformations were about to occur; able to tell of danger ahead like a canary in the coal mine. What has given Noonan’s writing grace and perspective in the past is an ability to see what the pack was missing. This time she was fully riding with the pack.

Her comments yesterday caught on tape that John McCain’s nomination of Sarah Palin for Vice President was “ . . . bullshit” and certain to damn McCain’s run were puzzling. What I found disappointing yesterday was the self assurance in her tone of voice. She was bemoaning McCain’s pick as a “ . . . narrative” choice by which I think she means a new face come in from the country with some stories that could be weaved for public consumption. She considered Palin a novelty.

Tom Shales, the TV critic for The Washington Post, was one of the few who got it right. Possibly because the kind of political turning that is happening today is much like what happens in movies, on TV and in stories. If McCain wins in November, he said, it would be because of Palin’s performance last night.

This has been a historic week. It is possible to see now two faces of the Democratic Party and two of the Republicans. Both parties are vastly improved; the Democrats by pushing Barach Obama to the center and sending the Clintons to the shadows. The Republicans did the same last night by bringing in Sarah Palin center stage and sending Romney and the others to the showers.

And Palin’s sudden success is precisely because of her “narrative.” Her story being told with images of her delightful family passing a newborn from arm to arm then over to Cindy McCain all during the night’s events presented a picture of Republicans – considered a party of clerks where I grew up – suddenly imbued with a vital new life force.

The baby and the Palins’ littlest daughter, wetting her hand to slick back the baby’s downy hair, stole the show. I’m sure Noonan is well educated. Perhaps it is time go back and reread Harriet Beecher Stowe’s historical novel “Uncle Tom’s Cabin.” Particularly the passage in this book that virtually changed the consciousness of the world which symbolized America’s journey from slavery to freedom with a narrative picture of a young woman crossing a frozen river with a newborn baby in her arms.

There was a good deal of talk of the “elites” and the “Eastern establishment” last night. Rightly so, because this election cycle more than any other outlines distinctions that have been evolving in both parties since the 1960s. Both parties have their traditional “establishments” but the Republicans are leaving theirs behind and morphing into a new political force. It is entirely relevant as it follows the contours of the American work force changing and adapting from the manufacturing base of the 1930s and before to a more mixed and varied economy featuring small businesses and entrepreneurial start ups. Romney stated it plainly: This is a race between East Coast Establishment and new Western developments unbeholding to the traditions of the Eastern elites.

And there is where Noonan missed the turn. She did so because she, a Wall Street Journal columnist with long ties to the Republican Party, has become part of that Eastern Establishment and subliminally reinforces and institutionalizes its vision.

Palin brought a sea change to Republican politics last night and Noonan and the rest of the pack missed it.

But then there is this: Noonan probably doesn’t know anyone from the indigenous American culture. People who name their kids after Van Halen and drive snow machines; people who wear the “3” decal on their truck window to honor the memory of The Intimidator, Dale Earnhardt; people who own service stations as the family business; people who have more than one child and more than three cousins; people who eat at Waffle House and have family hunting camps and go to hockey games.

If she did she would feel fully alienated from them, for this is a different country of the mind in class and in origin of culture than hers and it is a brand new American country.

Noonan is still the touchstone for political events. Her warm encouragement of Barack Obama signified that he had found full acceptance by the Eastern Establishment.

But this race is no longer about Obama or the Clintons or George W. Bush and the entrenched traditions of both Democrats and Republicans.

It is now about Peggy Noonan vs. Sarah Palin. Which will territorialize the political process and take the day? Noonan and the aged Establishments of the East or Sarah Palin and the new generations, the new politics and culture and the new people of the West?
Posted by Bernie Quigley at 8:03 AM