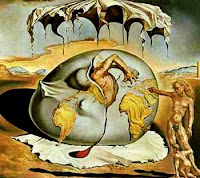 What the Egg Means

The Bird’s Nest and the Egg, the symbol of the China Olympics are a dream archetype. That is, the egg is a dream of original experience which suggests the very beginning of a new and creative period. Original artists and other creative persons dream of an egg in a nest or two eggs in a nest (See Quigley in Exile). The Surrealists group almost all dreamed of eggs in a nest. The dream is often two eggs in a nest and there is a statue of Lord Krishna in Michigan State’s anthropology museum of Krishna holding two eggs one in each hand. Another rendition of this is a theme of two birds in a tree – the eggs have hatched and represent the two forces of live, intuition and order, which might be considered a kind of yin and yang. Teh Bird's Nest and Water Cube divided by a street likewise represent the yin and yang in an intuition and order manifestation; circle or organic form always represents "psyche" or yin force and square always represents Yang or external order force. A line between them becaue as Neils Bohr said Particle and Wave are seperate.

The most famous of the egg pictures in the Surrealist Movement was Salvador Dali’s painting of Geopoliticus Man, a picture of man hatching out of an egg. Seen in context with other of Dali’s pictures, particularly Poetry in America, the blood dripping from the man can be seen to be coming from the Christ wound – the painting represents the “second Christ” or the Aquarian, who Dali has pictured elsewhere as a Buddhist monk in yellow robes descending from the Christ wound of a horse – Pegasus, who awakens the Age of Aquarius, and landing in a desert which in connection with the other pictures might be Texas. Dali did a series of the “egg” pictures all of which have the egg as the world and hatching in the place on the map which is the United States.
Posted by Bernie Quigley at 9:45 AM