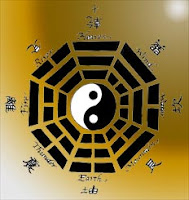 Inscrutable. The FBI might call in Fox Mulder for a consult when he is finished with Father Joe. Eight, you see, is the number of sides on a Ba Gua. Eight is, as any teen-aged viewer of Lost will tell you, the number of stacks on the five-thousand-year-old oracle known as the I Ching (which is a Ba Gua) and it is also the shape of the hatch and the shape of all things of the Dharma Initiative on the mysterious island. Eight is the sum total of the male quaternity and the female quaternity; the yin and the yang. Eight is the totality of human consciousness as it interfaces with cosmic consciousness.

It has been long since we have we seen such excitement. Not since the moon went blind in Boston when Big Papi, offering a prayer to Angela Rosa Arias, his mother in heaven, lifted the curse from us in 2004. The Yellow Emperor himself seems to be winking, as the sun fell into total eclipse on opening week. I wonder if the Politburu Standing Committee consulted court astrologers on this. I think not. As the I Ching points out, things just happen that way. Anyway, Mao had them all executed. But this is sure a long march from Mao.

As the opening ceremonies of the Olympics begin, viewers and visitors will be treated to an astonishing sight; a masterpiece of China’s oldest traditions in ancient costume and dance, peeks of which have been popping up all week on TV. The march of performers brings to mind the Terracotta Army, the 3,000 life-size statues built in the 2nd century to protect the tomb of the first emperor of China. It brings to mind the flying Taoist warrior monks of karate opera which have become mainstream soap and kid culture in the West since Crouching Tiger, Hidden Dragon. It also brings to mind the strength, brutality and might of the Red Armies which marched across the 20th century in Tiananmen Square and Moscow’s Red Square.

But up in Shanghai a different cord is heard when Gregory Rodriguez of the LA Times interviews Qingyun Ma, dean of the architecture school at USC and one of the world’s most promising architects, who spends his time between L.A. and his firm’s offices in Shanghai.

There's little room for historical sentimentality in Shanghai, Ma tells Rodriguez. It is a place that constantly looks to the future. The explosion of new skyscrapers going up everywhere seem to have the architectural density of cotton candy.

“Most of them are so superbly ugly that they're exciting,” says Ma. "If they're ugly, they'll be torn down sooner,"

Rodriguez says that as Westerners marvel at the enormity of China's urban building boom, they also tend to bemoan the ongoing demolition of the country's architectural patrimony. Even his guidebook complains about China's "perverse delight in destroying its own heritage" and the fact that in Shanghai, an enormous city of 19 million souls, only 600-odd buildings have been designated as protected historical sites, compared with nearly 40,000 in London.

But, he adds, Ma sheds no tears for the quaint buildings that have given way to thousands of new structures -- and they aren't all ugly by any means. In fact, Ma barely conceals his disdain for architectural nostalgia.

"The concept behind historic preservation is foolish," Ma tells Rodriguez. "It assumes that there is infinite space for future generations. We have to allow people in the future to build their environments based on their own needs and intelligence."

L.A.'s lack of historical sentimentality is one of the reasons Ma enjoys his adopted home.

Ma's worldview embraces a certain kind of chaos that he might say actually defines ‘tradition,’ writes Rodriguez, at least in the built environment: Things change, and that's the way it always has been.

Blade Runner meets Lao Tsu; the ancient and the endless comes to greet the temporary and the throw away.

Ma is China’s New Man. The New Man goes forth without a backward glance. But these same words and ideas have their own tradition and orthodoxy. They were heard a hundred years back when the great architect Albert Kahn brought the New Man to Detroit while his brother, another New Man, took offices in Moscow. We have seen the New Man in New York in early part of the 20th Century, in France and Germany in the 1920s and 1930s and the New Man of Russia as early as 1835: Lermontov was perhaps the prototype and Dostoyevsky’s Raskolnikov the primal archetype. But no where was the New Man so successful as when Comintern agent Gregory Voitinsky brought him to China and Andre Malraux and friends bought him to the Far East.

In the Olympics today China shows that it is beginning to learn what Russia and the West have learned; that the Old Soul does not die, it just sleeps. Beneath the picture of Stalin is the Black Madonna, and when the time is right, the Red Army with its tens of thousands of thermal nukes will be no match for a slim volume by Solzhenitsyn. Even Ford’s and Kahn’s industrial vision, presented by Huxley as a Brave New World, could not survive the sweet overheard chords of Patsy Cline and Hank Williams. Then it is suddenly all over for the New Man of Marx or his twin, the New Man of Industry and Capital and his People In Black (PIBs) who execute their ideas in steel and glass.

During the Cultural Revolution Mao set out to destroy every shred of the past that he could find. Monks and mandarins were hounded and destroyed by the hundreds of thousands. Then in 1981, Deng Xioping, desperately trying to find a way to raise cash, sent a state educated and trained athlete named Jet Li to an abandoned monastery called Shaolin Temple to think about making a movie about warrior monks who were said to be masters of kung fu. He found ruins. Only three monks had survived the torture and beatings in the new wave of chaos that was the Cultural Revolution. But that was enough to relearn China’s most ancient traditions and to make the movie, Shaolin Temple, which became a runaway hit and created a new genre.

Jet Li’s kung fu was strong. Reports are that so many Chinese young people left home to find their way to Shaolin Temple and become martial arts monks and experts that the Chinese government had to build new trains to send them back home.

China today is not the best of worlds, but it is a better world than that which existed before for over a billion of the world’s people. And from this day on, 8/8/08, the Chinese are a people that the rest of us will have to come to terms with as friends and competitors, much as the world had to learn to come to terms with America as we built in strength and imagination all through the 19th century.

And it found its way here, to us and to the 2008 Olympics, by finding its way back to itself via three Buddhist monks.
Posted by Bernie Quigley at 4:41 PM