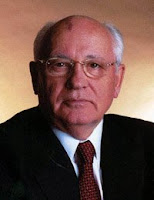 An article by Charlemagne of The Economist this last week succinctly explains that the EU is made up essentially of four economic sub groups - Mediterraneans, Continentals, Anglo-Saxons and Nordics. These groups seem a union of traditionally Catholic and Protestant Europe intentionally designed to keep out Orthodox Russia. This reflects the oldest and the first division of rising European consciousness and one that has plagued Europe since the fourth century. In light of the on-going conflicts in Kosovo, South Ossetia and Georgia, perhaps older cultural contours of Christendom would work better. Orthodox, Muslim, Catholic and Protestant were Europe’s ancient four pillars from its beginnings and through its history. These four form a European Quaternity; a quaternity is a psychological pattern of wholeness described by C.G. Jung as a complex and interacting pattern in which any one element was not complete, but broken, without the others. 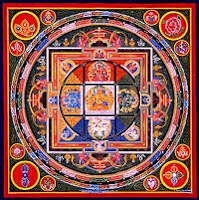 If Europe ever hopes to solve its problems - and Georgia, South Ossetia and Russia will always be Europe’s problems and will again soon be Europe’s problems as America begins to turn East – it will have to fully include Russia and it will have to include parts of Islam. Someone, perhaps France’s Nicholas Sarkozy, who is in Moscow for peace talks with Russian President Dmitry Medvedev, might initiate a forum to consider a new approach. And while in Moscow he might look south to the Hagia Sophia as Tolstoy did. He would find that culturally, if you walk until to get to Muslim lands, they are different only by degree and not by kind to Orthodoxy.

Whatever else you might say about him, Sarozy was right to initiate the Mediterranean Union and to welcome the southern regions as part of Europe’s remembrance of its shared past and its future. It was something that needed to be done and something that the Germans, the nominal economic leaders of the EU but still beholden to America, would never have done. Say what you like about him, but he and possibly he alone is able to open Europe to new ideas and new vision – ideas unhatched in America by think tanks and heavily-funded lobby groups and special interests which at best see Europe as an American sub state and at worst, a submissive vassal state of a conquered territory. 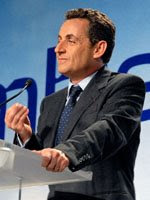 Sarko is ready for his close up. He could bring Europe’s four corners together at a benign center somewhere; a four-cornered mandala in which all in Europe’s traditions might interact.

He might also tap Mikail Gorbachev to this purpose and as an outside observer and avatar of new awakening, he could bring in his hot new wife’s pal, the Dalai Lama, and a few other outsiders, but this should be essentially an initiative for and about Europe; Cold Warrior-free, Bush-free, McCain-free, Clinton-free and Obama-free.

Some 15 years ago Gorbachev established an innovative forum through The Gorbachev Institute to discuss the state of the world by inviting world leaders from all paths of life – monks, soldiers, artists, historians, poets; invitees ranged from Vietnamese Buddhist monk Thich Nhat Hanh and Margaret Thatcher to George Schultz and James A. Baker. Even Shirley MacLaine and New Age guru Fritjof Capra. He might do the same now for Europe.

We are entering now the fourth political generation of America’s post-war arc of power. Europe is returning to itself and the buzz words and propaganda models which have become conditioned reflex to second and third generation no longer resonate. Zbigniew Brzezinski – said to be an Obama advisor these days – was first off the mark Sunday in comparing Russia’s Putin to Hitler, then suddenly it was springtime for Hitler as all the secondary press and its lobbyists and entrenched interests followed suit.

Not to be outdone, George Will said that he was even reminded of Hitler when he heard the traditional Chinese drum corps on its ancient instruments and saw the children waving at the opening ceremonies of the Beijing Olympics. It reminded him of Leni Riefenstahl’s propaganda films for the Third Reich. This is the old school; a wog’s a wog and a foreign devil by any other name is still a foreign devil.

But Will bemoans the passing of the night and the fog in a generation without history: “A worldwide audience of billions swooned over the Beijing ceremony,” he writes. “Who remembers 1934? Or anything.”

I remember Will on his Sunday morning TV talk show a year after he had been denouncing all of Europe as fascist accommodators and anti-Semites for not supporting Rumsfeld and those fey French in particular, saying wistfully: “I don’t think anybody really thought it would turn out like this.”

Anybody? Did somebody say Brett Scowcroft, Wesley Clark, Gary Hart, Jim Webb, so many others? And who gave Will and these other apologists soviet-style life contracts anyway? Couldn’t we treat them with the same honor, respect, love and equality that we grant to sports figures and fire them when they fail? Hockey legend Pat Quinn, a Canadian national hero who led the men’s hockey team to gold in the Winter Olympics of 2002 was fired within minutes when he failed to bring the Toronto Maple Leafs to the Stanley Cup.

Had any American commentator or statesman spoken adult-to-adult and in good faith about the Russian invasion of Georgia on Monday he would have been hounded off the stage by the voice of the horde as Wesley Clark was several weeks back when he responded simply to a journalist who had commented that crashing a jet fighter does no necessarily prepare one to be President.

But Gorbachev still has cache. In an essay published beneath Will’s in Tuesday’s Washington Post he writes: “The roots of this tragedy lie in the decision of Georgia's separatist leaders in 1991 to abolish South Ossetian autonomy. This turned out to be a time bomb for Georgia's territorial integrity. Each time successive Georgian leaders tried to impose their will by force -- both in South Ossetia and in Abkhazia, where the issues of autonomy are similar -- it only made the situation worse. New wounds aggravated old injuries.”

Nevertheless, it was still possible to find a political solution, he writes. For some time, the peacekeeping force composed of Russians, Georgians and Ossetians fulfilled its mission, and ordinary Ossetians and Georgians, found common ground.
Through all these years, Russia has continued to recognize Georgia's territorial integrity, says Gorbachev. Clearly, the only way to solve the South Ossetian problem on that basis is through peaceful means, but the Georgian leadership flouted this key principle.

“What happened on the night of Aug. 7 is beyond comprehension,” he writes. “The Georgian military attacked the South Ossetian capital of Tskhinvali with multiple rocket launchers designed to devastate large areas. Russia had to respond. To accuse it of aggression against ‘small, defenseless Georgia’ is not just hypocritical but shows a lack of humanity.”

Gorbachev points out that the Georgians were trained by hundreds of U.S. instructors, and its sophisticated military equipment was bought in a number of countries. This, coupled with the promise of NATO membership, emboldened Georgian leaders into thinking that they could get away with a "blitzkrieg" in South Ossetia. Georgian President Mikheil Saakashvili was expecting unconditional support from the West, and the West had given him reason to think he would have it.

“By declaring the Caucasus, a region that is thousands of miles from the American continent, a sphere of its ‘national interest,’ the United States made a serious blunder,” he writes. “Of course, peace in the Caucasus is in everyone's interest. But it is simply common sense to recognize that Russia is rooted there by common geography and centuries of history. Russia is not seeking territorial expansion, but it has legitimate interests in this region.”

This is plain talk from one of the world’s most highly regarded politicos; a statesman unparalleled in our time who risked his life and that of his family to bring about the end of 70 years of totalitarianism in Eastern Europe.

But I question today whether either political party or Presidential candidate in America, boxed in by entrenched and antiquated ideas – some more than a century out of date - of dominant special interests and lobby groups and a fully propagandized public, is willing or able to listen.

Where is the one free man who will break the trance?

Gorbachev might look to Sarko.
Posted by Bernie Quigley at 4:02 AM