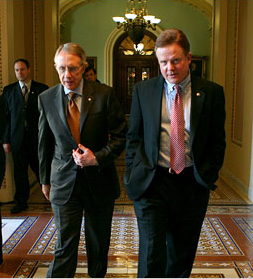 "I've been searching, looking for one good man. A spirit who would not bend or break who would sit at his father's right hand," - Johnny Cash, U2

On his first public day as a national figure, Jim Webb, rebutting Bush's State of the Union speech, is already a living legend. Historians will look to last night and today as the first day of the new century. It was one of the best speeches I have ever heard, bringing in the spirit of three great Americans to his rustic Virginia winter camp who changed the tide of history, Andrew Jackson, Teddy Roosevelt and Dwight Eisenhower; Presidents who changed the world as much by the force of their personalities as by their insight and abilities. Webb will do the same. It is possible to see now something extraordinary awakening within the Demographic Party and something rising as well in the heart of the common man. In terms of policy discussion it was on a level with the greatest minds and the greatest strategists, but when he talked about bringing his father's picture to bed with him it made this grown man cry. It takes a real man to do that.
Posted by Bernie Quigley at 6:09 AM