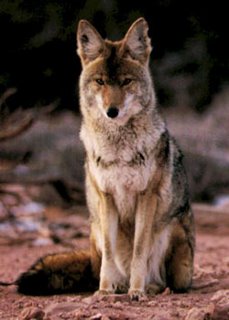 Recall Anthropology 101, at least as it was once taught, and the theories of heroes and gods rising in society to four level. This from William James, Sir James G. Frazer and Joseph Campbell. Any original social, cultural and political movement builds on four levels and rises to maturity with four different kinds of “gods.” The first level is Trickster, the Monkey God. In the United States Trickster is Coyote. Coyote’s only divine purpose is to change everything, to make it possible for the old to fall away, so the world can be born new again. Coyote Trickster changes the culture and the generations. After Coyote Trickster nothing is ever the same again. Jim Webb is Coyote. After his response to the President on Tuesday night, the political culture will be born again, entirely new and beholden to nothing which went before.

According to historians William Straus and Neil Howe, each historical post-war period is divided into four generations and last 80 years, with each generation having a 20-year run. Each generation also has its own gods, heroes, goddesses and Great Mothers, all starting with Coyote Trickster. I am 60 years old and a product of the Second Generation. The Coyote Trickster of my generation was Bob Dylan. It is said that the generations changed from first to second one afternoon in when Dylan changed from a wooden guitar to an electric guitar in the region of 1965. Bob Dylan changed everything, but in particular, he changed the gods who would follow. Paul McCartney said that The Beatles enjoyed writing teen age love songs, but when they first heard Bob Dylan, they then desired to be artists. Today, on mainstream crappy radio and TV ads it is impossible not to see the influence of Dylan, Magical Animal and Coyote Trickster of Generation Two almost everywhere – hair, garments, attitude, tone of voice.

We enter now the Fourth Generation, the most critical generation, according to Strauss and Howe in their most provocative book, “The Fourth Turning.” Jim Webb will be Coyote Trickster to this new generation. Everything starts new with Trickster: Everything before is suddenly old. The shift in generations is like plate tectonics: Try to picture Dean Martin, probably the most popular singer in his day to First Generation in the mid 1950s, making a comeback after Dylan had brought forth “Like a Rolling Stone” and the Beatles “A Day in a Life.”

The waning generation always tries to stop the birth of the rising generation: Dylan’s record company refused to air his anthem, “Like a Rolling Stone” and he had to bypass normal channels – he had it played in a famous club called “Arthur’s” and from there it became an overnight sensation on radio. ‘Twas ever thus. When William Lloyd Garrison wanted to bring forth a new idea in 1831 he had to start his own newspaper and ignore the Conventional Religionists of the entrenched attitudes of previous generations. Likewise today, the blogs and the on-line independent journals do the same.

Commentators and historians who look for signs of “fourth generation” have looked to Daily Kos in the last year. Certainly older people read DKos today, but it began as a new generation’s approach to politics and a graph of its yearly readership in early days also pretty closely graphs the college year. In this Marcos is Monkey God.

Statistics bear out now the shift in generations is already taking place. Mainstream press, the end-game culture of previous generations two and three, present Senator Clinton as the leading candidate for the Presidency in ’08. Her appeal is largely from name recognition in the generic culture, and cash flow from her own generation which seeks to extend itself beyond its natural reign. DKos today has her placed fifth, and she has only in the last six months (when many more older people entered DKos) risen to four percnet from zero.

Jim Webb’s comments on on Tuesday night were clear and uncompromising: We knew all along, we were told at the beginning. Senator Clinton’s position, in an interview with John Roberts at CNN on Jan. 21 were: If only we knew now what we knew then. These are the same comments first brought forth my mainstream pundits of the right, David Brooks and George Will in particular, six months or so into the journey when it was clear that it the invasion of Iraq was a failed.

Indeed, we did know all along and were told at the beginning what would happen in by Jim Webb in the pages of The Washington Post. And we were told as well daily on the pages of DKos and the other political blogs and on-line journals.

Jim Webb is a folkloric character. He carries (as in a Glock 9) when he in not in the Senate and chews tobacco. He speaks proudly of being Scotch-Irish, the culture of the common people of and Appalachia, while Dems of Second Generation aspire to be billionaires and via for land deals in Nantucket and . Most Democrats in New England today share common roots with Webb, but might be called “upper working class” as they have left the common culture behind to seek instead the penthouse. They might be called “Frasier” Democrats; in reference to the charming TV show of the ‘90s about two psychiatrist brothers who live ’s penthouse culture, and whose father, who lives with them and sits in an old duct-taped chair, was a cop. It is a crisis of authenticy the generation suffers and is dramatically well presented as such in this long-running sit-com. Jim Webb experiences no such crisis. Webb brings to politics the love-based values of – family, community, honor, responsibility to one’s fellows. He awakens once again in the Democratic Party its older heritage – the Party of the Common Man and Woman.

His speech in response to Bush’s State of the was one of the greatest speeches I have ever heard. It portends something new and astonishing happening within the Democratic Party. With it, the rising political generation has crossed the river to the new country. I think Old School senses it right away, as John Kerry might have when he decided not to run the next day. Rightly so. The season has changed.

Hearing Webb’s speech the other night commentator Mark Shields said “A star is born.” It is a star which will rise with a new generation and the values Webb brings to politics will become the values of that generation, as always, in opposition to the generations which came before. Marcos yesterday claimed Webb as his own; that is, as the product of the net roots. Rightly so. It doesn’t matter if the new culture in the Democratic Party finds success in 2008. Perhaps it will take longer for the old culture to fall away. But there is now no question that what is new in the Democratic Party will rise now with Jim Webb and a generation will rise with it which will bring new values to the Party and to the country over the next 20 years.
Posted by Bernie Quigley at 7:21 AM

"Lord, I have a problem!"
"What's the problem, Eve?"
"Lord, I know you've created me and have provided this beautiful garden and all of these wonderful animals and that hilarious comedy snake, but I'm just not happy."
"Why is that, Eve?" came the reply from above.
"Lord, I am lonely. And I'm sick to death of apples." "Well, Eve, in that case, I have a solution. I shall create a man for you."
"What's a 'man,' Lord?"
"This man will be a flawed creature, with aggressive tendencies, an enormous ego and an inability to empathize or listen to you properly, he'll basically give you a hard time. He'll be bigger, faster, and more muscular than you. He'll be really good at fighting and kicking a ball about and hunting fleet-footed ruminants, But, he'll be pretty good in the sack."
"I can put up with that," says Eve, with an ironically raised eyebrow.
"Yeah well, he's better than a poke in the eye with a burnt stick. But, there is one condition."
"What's that, Lord?"
"You'll have to let him believe that I made him first."
:D :D :D

This a good link's !
Posted by Admin