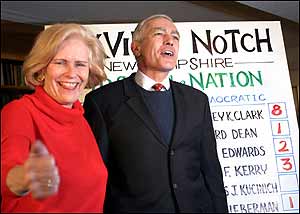 When we look back years from now, we will look at 2006 as the beginning of the new century. And we will see a new Democratic Party rise from that year; a party in which soldiers and veterans can feel pride and comfort. And respect: Something many of us haven’t felt in a long, long time. It was the year of the Fighting Dems, a new breed of Democrat; veterans of war who brought their dedication to duty to public office. But change is beginning to pervade the culture everywhere.

Each year for the last five years, my kids have played in a high school band at Veterans Day ceremonies. Each year, fewer and fewer men have marched and they are the old timers, veterans from World War II. It even got to the point a few years ago when they asked the local Cub Scouts to fill in. But this year in the front row of the parade were four young men just out of Marine boot camp. Kids I’d driven to band rehearsals and competitions and other high school events just two years ago, now trim, fit and hardly recognizable in their new dress Marine uniforms. We are proud of them. Their high school friends admire and respect them.

We are seeing change: The nihilist strain is disappearing up here in the heartland; fewer kids dress in black, torn Marilyn Manson shirts with chipped, black finger nail polish. And drug use up here is dropping. (Actually it is dropping only among teens. It is rising among the 55 to 60 group.)

I could feel it happening last year and I felt it first when Jim Webb rose out of the Old Dominion as if out of nowhere. I knew it would begin with Jim. I felt that his primary race was even more important than the general against George Allen: A gutsy, spirited character like Jim needed to ascend over the urban professional sensibility (and the fine-boned sensitivity of what us proles from South Boston used to call “Lace-Curtain Democrats”) which gravitated to Harris Miller. When that happened, the Democrats proved that they could change their very nature in a mixed region like northern , and that is what has to happen if we are to go forward as a party.

I feel exactly the same about 2008: The upcoming primary can change the sensibilities of the Democrats and the Democrats need to be changed. I have no doubt that we can win in ’08. The Republicans are in free-fall and come to a dead end with the current mischief of Boy George and his Dungeon & Dragon Warriors. Even McCain is falling into ill-repute. But winning is not enough. If we win with a candidate who doesn’t advance the new changes, it will be a vain effort. Only Wesley Clark brings that new sensibility to the country.

I would like us veterans to encourage General Clark to run for President. Here are two real-world, reality-based reasons whey he should run: Demographics and Generational Shift.

Demographics: The burial ceremonies for President Ford have reminded us of what decent people we Americans can be. It also puts into perspective how our world has changed since his Presidency. And from then until now, most every influential cultural figure has been from the South: Jimmy Carter, Johnny Cash, Pat Robertson, Otis Redding, Little Richard, Tammy Faye Baker, Bill Clinton, Jimmy Johnson, Jimmy Swagger, Waylon Jennings, the Intimidating # 3 in the Big Black Car. This will continue. The North used to be the Red States. Now they are Blue. We are seeing the historic rise of indigenous – formed of red clay, desert, Delta mud and Appalachian prayer and song – beholding to no one who came before from Europe, or anywhere else. General Clark is an American Son who epitomizes this change in demographics and history. He will begin to give a new Democratic Party and a new century shape, sense and sensibility.

Generational Shift: We are at the cusp of a major shift in generations as the fourth post-war generation rises to power. 2006 was the year of the turning. I’ve been writing about this all year, citing William Strauss and Neil Howe’s book The Fourth Turning.

Today, both parties yearn for the past. The Republicans are almost now as bad off as was during Franco’s regime, lost in nostalgia for the “Great Communicator.” I was briefly lost and confused the other day when I flipped through the channels during the Rose Bowl to see on C-Span that they were re-running the funeral of Ronald Reagan. I resisted the temptation to write a piece titled, “Ronald Reagan is Still Dead” – as the Saturday Night people did week after week with Generalissimo Franco, way long ago.

But we Democrats are not far off, and that is why I have been ragging on the this past year. The day after John Kerry received the nomination in ’04, The New York Times ran an op-ed saying Bill should be Vice President. Today on Daily Kos, someone proposed that Bill be Secretary of State. This is the classic effect of generationality; each generation has its own culture and heroes and finds its life force therewith, and is loath to let go. But if the Democrats are to go forward, Elvis needs to leave the building.

Each generation is superseded by the next, which countervails the values of the last. Each needs entirely new heroes, new monks & poets, new goddesses, new Great Mothers and artists. As Strauss and Howe point out in their fascinating book, generations can change in a matter of hours. We have seen it change in the last year. I vividly remember Donald Rumsfeld on his first day walking to office with Jerry Ford. He marked the third generation from its first moment to its last. Jim Webb marks the new generation. Like Rumsfeld, he will be present in some role through the next 20 years until the post-war period ends. And that period will be marked by Wesley Clark.

Senators Clinton and Obama are both generation and nostalgia candidates, both geared to times past and generations past. Obama will not hold up under scrutiny. The kind of extensive drug use described in his early autobiography may have been accepted in the Sixties and Seventies and perhaps still is today in liberal spas of the Beautiful People like Nantucket and Martha’s Vineyard, but it will not longer play among the common people in Tobaccoville, North Carolina and Haverhill, New Hampshire. And the victimization theme he claims has run pretty threadbare. It will not draw much sympathy in red .

And a Hillary Clinton Presidency would bring turmoil to the country and the fourth-generation crisis will be an internal one. I am hoping that John Edwards will not be the best of all possible worlds in ’08. I saw him up here last week and he seemed to have the most decent and altruistic ideas, but also the most naïve. He was our Senator in North Carolina and I feel a kinship with him and Elizabeth. They are people of family, faith and community. But truth be told, I cannot imagine what it is that makes him think that he should be President.

I’m all about Wes. I’m looking forward to his new book. I especially want to hear more about his early childhood transition from to and the turning of events during which he spoke about up here at last spring. paralleled my own life, as I was a kind of student advisor at a Southern university at the time. The students were left adrift when the President, with Eli Weisel standing behind him, said publicly that he didn’t know what to do. That brought a critical American turning point – from then until now, we haven’t known what to do in foreign policy unless General Clark told us what to do.

Those who live within Boston would definitely benefit from checking out the various used cars Boston has to offer.