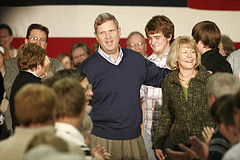 Tom Vilsack, Governor of Iowa, gave a confident speech in his native place yesterday to a beautiful heartland crowd which might have come from a Frank Capra movie. It will come to mind again this Christmas when we watch the Capra classic, It’s a Wonderful Life, as the Vilsacks seem to live in George Bailey’s mythical town and Tom appears to be its mayor.

Like Longfellow Deeds, Jefferson Smith, George Bailey and all of Capra’s heroes, Vilsack sees himself as the underdog Democrat running for President in 2008.

“I have always been an underdog and a long shot,” he said. “I’ve always been inspired by the stories of ordinary citizens who worked hard, overcame adversity and succeeded.”

Pure Capra. But I don’t think he planned it like that. It’s just like that in , Vilsack’s adopted hometown. It’s a church supper, college football crowd of unpretentious farm folk. The kind of town which Capra saw to be the American nirvana – the core of the country’s spiritual sensibilities and the wellspring of its inner life. Vilsack’s life in fact, reads like a Capra script: Born an orphan in and adopted by a loving but alcoholic mother and raised by a single father who grew deeper and deeper into poverty.

“I know what it means to be alone,” he told the crowd.

But for Vilsack, alone was only a starting point. Fate brought him to his father-in-law’s law office in small-town and he was suddenly called to service when a disturbed citizen busted into a City Council session and killed the mayor. From there he almost inexplicably ended up as Governor; and a Democratic governor in the reddest of states. When he turns over the keys to the new Governor next month Democrats will control ’s legislature and the Governor’s office for the first time in four decades.

The press and pundits waiting for him in also see Vilsack as a long shot. But they yearn for the return of a season past rather than the day ahead. They need to watch Frank Capra this Christmas to see where comes from and where it is restored. And they need to learn how to count.

That’s the advise of Steve Jarding and Dave “Mudcat” Saunders, who ran Mark Warner’s race for Governor of Virginia in 2001, the first indication of a paradigm change in politics when a Connecticut-reared, Harvard-educated Nextel entrepreneur turned the tide of heartland Republicanism simply by treating country people as his equals. They also had a hand in Jim Webb’s significant victory this past month in Virginia and have written a book on their strategy called Foxes in the Henhouse: How the Republicans Stole the Heartland and What the Democrats Must Do to Run ‘em Out. It is virtually a manual for running for political office here at the burgeoning Third Millennium.

First off, they tell Democrats: Learn How to Count.

But Democrats don’t seem to get this math, they say, and simply write off 20 primarily southern and rural states and their total 164 electoral votes. In the last Presidential election the Democrats conceded 227 electoral votes in twenty-seven states to Bush before any votes were actually cast.

The Democrats cannot win this way. If they want to be taken seriously again in Presidential politics they have to find a candidate who will appeal to the heartland. They make the point that most rural and heartland states began their political destiny as Democratic.

Today, influential Democratic strategists still look to the cities and the suburbs in hopes that the Electoral College will just go away. Press people as well, being city folk, share this delusion and continually project candidates more suited to the salad bar and the wine and cheese tasting rather than the NASCAR track. How many rural and red states are proposed Democratic frontrunners Hillary Clinton and Barack Obama likely to win today? In , John Edwards leads the unannounced pack, but not by much. And as Jarding said in a recent newspaper article, not by enough.

But that was last week and this is now. Iowans are not going to give him a free pass, Vilsack told The New York Times, assessing his chances in the caucuses to be held in 13 months, “And they shouldn’t.”

Good spirit. Nevertheless, I think Vilsack just won the caucus. And as those of us who worked for Wesley Clark in the primary learned at the very beginning of the curve in 2004, it was all about . As Frank Capra suggests, maybe it should be.

“The Democrats must get off this cultural high ground they have been living on for the past twenty-five years,” write Jarding and Saunders. “When you want to represent people, you have to talk to them where they live. Talk to them about what they like to do for fun, what makes life enjoyable for them, what their fears are. And when you find out that they like NASCAR races, that they like country or bluegrass music, that they like to hunt or fish, don’t pass judgment on them. Embrace them.”

Some I can’t see at the NASCAR track, but others I can. Mark Warner I can, Jim Webb I can, Kathleen Sebelius, Governor of Kansas, I can, Wes Clark I can, and Tom Vilsack I can. It should be the everyman stop as Pat’s Steaks in Philly was or as the Irish pub in was in industrial days now past. And if candidates feel uncomfortable there then perhaps they don’t belong in Presidential politics. They will be writing off 227 electoral votes. Anyway, watching Vilsack’s speech last night on C Span I think he’s already got those votes. And he doesn’t need to hire Mudcat to seem regular.

“Three weeks ago, Americans courageously voted to create change,” Vilsack said. “We sent a clear message that we wanted our country led in a new and better direction. But our job is not done. We have more work to do . . . That is why I am here today - to continue our work, and to bring the courage to create change to . It will take leadership to create this change. But it also will take an active sense of community.

“Together, with the courage to create change, let us build a 21st Century economy of cutting-edge companies and technologies that lead us to energy security. Energy security will revitalize rural , re-establish our moral leadership on global warming and climate security and eliminate our addiction to foreign oil.

“Together, with the courage to create change let us embrace a new foreign policy that renews friendships, develops alliances and isolates enemies. In , we must act, take our troops out of harm's way and allow Iraqis to begin providing their own security.”

This last phrase blends well with those elsewhere today in The Washington Post, as Peter Baker and Thomas E. Ricks report that James A. Baker’s bipartisan Iraq Study Group plans to recommend withdrawing nearly all U.S. combat units from Iraq by early 2008 while leaving behind troops to train, advise and support the Iraqis, setting the first goal for a major drawdown of U.S. forces.

"Everybody understands that we're at the end of the road here,” one of the sources told the reporters.

The country people in places like , , , and , say that when the Lord closes one door, He opens another.
Posted by Bernie Quigley at 7:02 AM

Hey everyone, I'm new! ..... just made my profile. Everyone says I need to share

something so I Just thought I'd let you know a place where I made an extra $800 last month!
Click here to find out more!
Be sure to check out my new page. :)

Hey everyone, I'm new! ..... just made my profile. Everyone says I need to share

something so I Just thought I'd let you know a place where I made an extra $800 last month!
Click here to find out more!
Be sure to check out my new page. :)

Finally the real thing - no more ripoffs! Enhancement Patches are hot right now, VERY hot! Unfortunately, most are cheap imitiations and do very little to increase your size and stamina.
Well this is the real thing, not an imitation! One of the very originals, the absolutely strongest Patch available, anywhere!

Check out the site http://www.seemoco.info for more info TODAY, you'll be glad you did ;)

The erectile dysfunction drug viagra which is a must sought after by impotency afflicted people throughout the world has shown its multi-benefits by reducing the blood pressure levels in people suffering from Chronic Obstructive Pulmonary Diseases and has been also approved by the FDA as a suitable treatment for the same. So, from now on after you buy viagra online, you can not only treat your erectile dysfunction but also cure your pulmonary blood pressure. Hence, what is the point in waiting to buy viagra? Get hold of Viagra through viagra online and resume your war against erectile dysfunction. The most obvious advantage gained by buying Viagra from a suitable internet source is that if you buy Viagra online, cheap viagra is the ultimate product that is delivered at your doorstep.

Viagra is the world renowned medicine for erectile dysfunction and most men have forgotten they ever had a problem with erections after its use. Take it on empty stomach and it will work in 30 minutes. Erections can be achieved on stimulation.

Generic Cialis is slightly different from the other erectile drugs available in the market as it may work up to 36 hrs after dosing. Generic Levitra orks along with sexual stimulation to help achieve an erection when taken 30 to 60 minutes before sexual activity.

Generic Viagra contains Sildenafil and it is a prescription drug used to treat erectile dysfunction. Erectile dysfunction is the inability of the penis to become rigid, or stay firm long enough to complete the sexual act.

Really you have done great job,There are may person searching about that now they will find enough resources by your post.I like this blog..