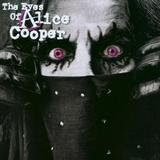 I don’t think I’ve ever heard a Libertarian refer to her or his favorite candidate as a rock star. Nor a Republican. John McCain doesn’t bring to mind rock star. He brings to mind Joshua Chamberlain in a way or George Marshall possibly. Nor does Wesley Clark or Mitt Romney or Kathleen Sebelius, the governor of who has just been appointed head of the Democratic Governor’s Association. And of all the things I dislike about Boy George (the President, not the rock star) – his being a President, primarily – the one thing I do like about him is that he in no way resembles the real Boy George or any other rock star. Indeed, I can’t think of anything less desirable in a President than rock star characteristics.

But it is all we hear from Democrats today and their incumbent journalist corp. It has been the constant refrain;

perhaps it is the standard maxim of this dwindling subculture. They love to party in and at Martha's Vinyard, where Bill Clinton vacations in borrowed homes, probably the most expensive pieces of real estate on earth and a bastion of rock stars (and a good portion of it owned by John Kerry). James Taylor lives there. And Carly Simon. For people under 50, they used to be rock stars.

The cliché has reached epidemic proportions. People love clichés because they bond – but they freeze you in days past. By using clichés it is impossible to expand, to grow, to learn, to be free. Clichés teach you what you already know. By using clichés you become like the Hobbits who like to read the same book over and over. Lighting up a jumbo on the pier at and listening to the old tunes: It bonds them generationally and gives them the feeling that the Sixties is coming back. It isn’t. (Somebody tell the Nantucket Democrats.)

Most of these rock stars are in fact pretty trashy – they say the gods take the great ones young - John Lennon, Kurt Cobain - so they don’t end their lives selling storm windows on TV or playing the Super Bowl and Bar Mitzpahs. It is so Second Millennium. Actually, besides journalists, the only people who listen to this music today I think are grocery store managers – you can never get away from it in grocery stores.

My first son was in a punk band in high school and he’s all grown up already. My next high school son listens to jazz, blue grass, and ska and terrific world music and bands like Dropkick Murphy and Flogging Molly. I noticed some statistics the other day which said drug use is going up by about 4% a year. But in high schools it is going down by 1% a year. (As Malcolm asked a high school friend in Malcolm in the Middle: “Do you even know anyone who takes drugs?”). But drug use in going up in people between ages 55 and 60. Do any of these people have kids? Have lives?

Joe Trippi, who is credited with bringing Howard Dean (who is a rock star) from off the to 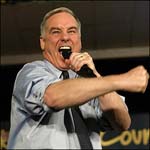 some approximation of real political life used the term in a Washington Post article recently in reference to Senator Clinton and Senator Obama. Markos Moulitsas of the Daily Kos calls everybody he likes a rock star even excellent, sober managers like Kathleen Sebelius, who is anything but. And even my governor, John Lynch, who should know better, announcing Obama up here the other day said, "We originally scheduled the Rolling Stones for this event. We cancelled them when we realized Sen. Obama would sell more tickets.” 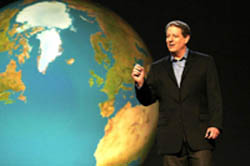 It shows an immaturity Democrats bring to politics as the party of the perpetual undergraduate and Bill Clinton's regular association with Mick Jagger and the Rolling Stones amplifies the paradigm. It needs to be remembered that the Democrats have lost three Presidential races forty-to-nothing since WW II - to Eisenhower, to Nixon, to Reagan. One more rock star and the party with be finished for good.

“Journalists might greet this growing counterculture with curiosity, even approval,” writes Carter. “But Wallace 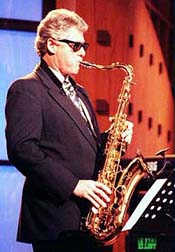 knew – instinctively, intuitively – that tens of millions Americans despised the civil rights agitators, the antiwar demonstrators, the sexual exhibitionists as symbols of a fundamental decline in the traditional cultural compass of God, family, and country.”

Wallace invoked images of a nation in crisis, writes Carter, a country in which thugs roamed the streets with impunity, antiwar demonstrators embraced the hated Communist Vietcong, and brazen youth flaunted their taste for “dirty” books and movies. “And while disintegrated, cowardly politicians, bureaucrats, and distant federal judges capitulated to these loathsome forces."

There is something about us in that likes to lose. It makes us feel superior. But it abdicates us from responsibility. Maybe the angel has passed us by. Maybe it is The Curse, but now it seems to have spread to as well. It seems, at the moment, worse than ever.

Facing John McCain with Romney as Vice President and Arnold Schwarzenegger suggested and implied as Secretary of State, any of the "rock stars" chronically suggested by liberal pundits today will lose in 2008 forty-nine to one. Again.
Posted by Bernie Quigley at 6:21 AM