Fighting Dems: What Did You Do in the War, Daddy (Mommy)? 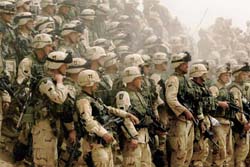 The live blogging below on Daily Kos set a good discussion about the emerging character of the new Congress, not only for veterans who entered the Congress but for all new members who supported their efforts - it is a new direction; a sea change of feeling and sensibility in which these new people embark. All veterans should be taught the value of their service as an organic expression and natural feeling of citizenship. They should consider future public service in their lives in a similar vein and they should be officially encouraged to enter public service. Valor, duty, dharma: They come from nature. These virtues can only enter into public life if the people of common ordinary valor who freely entered into service enter into politics as well. We have seen in our time - the last 30 years before 9/11 - the harmonic conversion of the bureaucratic skills of organization man and the expediency of the common criminal formng a political class bordering on criminal sensibility. If the war in Iraq has done one thing it has brought out again natural patriotism and duty and brought to those women and men who serve, once again, the true feelings of respect and caring of their community. The Fighting Dems can be a matrix of nurturing for this new political culture.
Posted by Bernie Quigley at 5:54 PM