John Edwards to the Fore

By Bernie Quigley - going out Monday to The Free Market News Network, 8/28/06 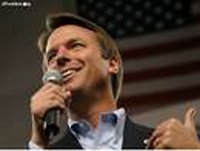 It takes more than one person to make a mess as big as Iraq. - Thomas E. Ricks in Fiasco: The American Military Adventure in Iraq

When Virginia Senator George Allen referred to an American of Indian ethnicity as Macaca, a type of monkey, last week, the entire tide of the political culture may have changed. In calling the student a monkey, Allen has become the goat. This is bad for Bush. The upcoming November primary between Allen and Jim Webb is being watched as a paradigm event. However it works out in , so it could go in 2008. Allen has apologized so many times now that he is being asked to stop apologizing. But this will continue to weight him down.

It was a fairly stupid move on Allen’s part. The young man, S.R. Sidarth, a senior at , was pointing a camera at him. Within hours, the event was posted on the Daily Kos for everyone to see. And as Allen’s staff presented the most ridiculous excuses – he was trying to say Mohawk – it just made things worse.

What Sidarth did was lift a rock to show the world the real George Allen, the bitter and hostile out-of-town Confederate wannabe that those of us who worked in his bureaucracy knew a dozen years ago when he all but destroyed the state of Virginia by poor management when he was Governor.

He goes into his primary battle with Webb now on the defensive.

Allen was supposed to lead the charge to 2008 as Pathfinder for the conservative wing of the Republican Party, but now a shadow is cast over all their efforts. And this, coming at a time when the Republicans are down almost 20% in the bellwether state of Ohio and a loss of up to 26 seats in the House is expected.

The plates have shifted this week and the downward movement of the Republicans converges with changes in the primary system to send certain Democrats up. The Democrats, under the leadership of Howard Dean, have recommended removing and from their hallowed perch as first and second of the political season by frontloading the 2008 primary season with other primaries and caucuses in the South and the Southwest. This could dramatically change fortunes for the Democrats.

The primary is a kind of off-Broadway theater production to test new actors and partisans. It has always served well in bringing in new people with new ideas – Ronald Reagan, Pat Buchanan – and it has often favored the exceptional candidate or the particularly gifted Dark Horse rather than the mainstream candidates.

Under the new rules caucuses and core party people will have a good deal more influence. This tends to orthodoxy rather than innovation and to sustainablity rather than experimentation, and the mainstream candidates, Senator John Kerry, Senator Hillary Clinton and John Edwards will be favored. This is bad for the brilliant and gifted Dark Horses, Wesley Clark and Mark Warner. Warner, who spoke up here in New Hampshire last week, brings a big new idea to the Democrats; a Democratic Party with management values. He will be noticed and appreciated up here in the New Hampshire primary, but the new primary system will send voters to the more traditional and the known in the other primaries. By 2012, his second time around, Warner will have a better chance.

And this week a third element has been added. This week at long last, the President has all but admitted failure in the . The crisis in government is over. Breakage will continue and still there is no way out, and problems will multiply exponentially if housing tanks the economy, but the first admission has arrived and recovery can begin. It is like the alcoholic who’s first most important step is to admit he has a problem – same with those who are drunk with power.

Of the three mainstream candidates, Kerry, Clinton and Edwards, Edwards stands to gain in this new political environment. It sounds like an oxymoron but even though the war is a disaster, as Gary Hart, Brent Scowcroft and others predicted, voting in favor of it will be to the benefit of these three. More than 80% of Americans initially supported this war, just as Kerry, and Edwards did. Their support was primarily a sign of good faith in in the sad days after 9/11 and trust in leadership at this crucial time. They will not want to be reminded that policies were misguided. The people did not fail. Bush and his insidious neocon advisors failed the American people.

Both Clinton and Kerry will now spew venom on Bush, Cheney and Rumsfeld and already they are doing so. Among these three, Edwards alone seems not to have the Revenge Gene.

Among the young voters at the Daily Kos, the Dark Horses ride high. Warner and Clark have consistently scored highest in this past year, but among the mainstream candidates only John Edwards has strong appeal. Kerry’s approval rating is next to nothing. Senator Clinton’s is zero. Of all the groups bonded for political influence today, the 20 million monthly readers of the Daily Kos is the most important. Most are under 30. They mark a generation and it is the generation which will run this country for the next 30 years. And as the Lieberman primary indicated, their power is beginning to be felt.

By the time the primary season starts, the mainstream caucuses and party activists will realize that Senator Clinton's Presidential hopes and wishes are a fiction, and one that could bring great damage to the country and destroy the Democratic Party. That will leave only Kerry and Edwards.

There is nothing yet to tell us if Kerry will run. Edwards almost certainly will. As of now, he would have most to gain in the new primary system.

There is much to like about him. He knows how to throw a football. He is a great debater and although his debate with Vice President Cheney was overlooked by the press, it was one of the best debates in recent years.

And he is one of us. When the primary season first started, I brought my children to one of his first events at the Coffee Cup in . As it turned out, we ended up having lunch with Edwards, his wife Elizabeth and his daughter Cate. I compared him then to Tip O’Neil and the old real world politicians in these parts who came from places like Hell’s Kitchen and .

And finally, he is a Southerner. And there is a certain kind of Yankee who really annoys Southern people and Texans. Not all. I don’t think Mitt Romney would or Mike Bloomberg or even George Pataki, but Clinton does and so does Kerry. There is an arrogance to them; a pedantic, jaw-jutting self-righteousness that seems to hover in the room. And that Nantucket thing; the desire to see and be seen on quaffing tall boys with Carly Simon and the Beautiful People . . . .

Edwards has none of these pretensions. And he is a relative newcomer to the political world. And we need new people. Thomas E. Ricks' remarkable new book, Fiasco: The American Military Adventure in Iraq, documents the tragety of Iraq mistep by mistept, with lies, deceit, misdirection and confusion orchestrated by so very, very few. At its core, really only one or two individuals, pledging their time for almost two decades, waiting for the day when an innocent waif like George W. Bush would reach the Presidency. And at that tragic, pivotal moment of 9/11 they cast their net, bringing in the army, the government, the press and 80 percent of the American people. With Edwards, perhaps we can put the war behind us without venom or vindication, and go forth into the world again in faith and good hope.

Posted by Bernie Quigley at 9:08 AM