by Bernie Quigley - for The Free Market News Network 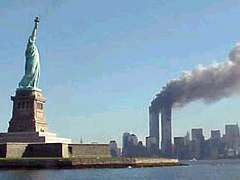 It's a sad sad story when a mother will teach her Daughter that she ought to hate a perfect stranger. - The Dixie Chicks

We are rapidly approaching the Helter Skelter turning point. That place of crisis and relief where the culture flips, and everything good and inspiring that ascended us to this point in the last 20 years or so suddenly spirals downward, and is sent into shadow overnight. And the good of it and the pious intentions of the incompetent and incapable who managed to reach such astonishing heights of high authority in so many places and bring us there with them are forgotten and despised. Only the chaos, the incompetence and the sadness caused are vaguely recalled. History is made of moments like this.

It is a time like that way back when in the Sixties when all things reached a bubbling point and normally predictable English majors from expensive and classy women’s colleges suddenly abandoned the Grand Tour and the normal course of events to help instead a bunch of self-styled local black nationalists rob a bank. A time when a common and ordinary unfortunate who might normally in a good and healthy society find joy in everyday life in simple work and grace and redemption in the church choir, instead would carve a cryptic symbol on his forehead and find a special vision and direction from God sent especially to him in a Beatle’s lyric offhandedly swaged from The Gospel of Thomas, ordering him to mayhem.

It has been building for years. Maybe since they changed the money from a perfect symmetry of circles and squares to something other; a thing out of kilter with bloated and egotistical heads; the center lost in a nihilistic, deconstructivist new dollar. Was then that some of my normally genuine and solid friends and neighbors in the Appalachian hills started carrying Glocks and cross breeding their Rottweilers with Pitt Bulls to fight again. And at the feed store, talking of Jesus and Saddam Hussein and Armageddon, all in the same sentence.

It is time to open a new ward in the psychobilly prison. Maybe he will find Jesus there like the killer of John Lennon. Maybe not. Anyway, like Charlie Manson or Mark David Chapman, their names and the squalid details of their sad and desperate lives will be half forgotten when the culture flips.

Who was Sirhan Sirhan? What was that Symbionese army thing in about? Whatever happened to that best-selling black author who bragged about raping white women to practice for marriage with a black woman? Half forgotten when the mayhem passes: Died from drugs. Hit by a car. Still in jail. Found Jesus. Who?

But history is made of such moments because it is then that Nature calls forth the brave and the essential. Often they had been always here, even hiding in their own shadows until this awakening. What I find remarkable about Oliver Stone is that when he shows strength it is true strength; when he shows art he is a true artist and when he talks in truth, no one can tell truth as he does. He ascends from mayhem to bring us courage, character and honor.

It is a word he has never used to date. Others have used it even about themselves, but there is a Taoist saying: Those who say don’t know – those who know don’t say. Now is a time of honor and we will call it forth from those of whom it flows naturally. I have a friend who lived all 60 of his years so far in one of the lovely townhouses on the boardwalk of which faces southern and the empty space where the used to stand. He vacations up here in the mountains, but since 9/11 he has not been back home to because he cannot bear to look across the river. My wife cannot see Stone’s movie, World Trade Center, about two ordinary people who found within themselves courage growing like kudzu, one of whom didn’t know the movie was about him until last week. But those who can should see the movie.

The events of September 11 were a lot to assimilate. Norman Mailer, the greatest writer of his generation and the most representative of , said at the time that the events of 9/11 would change our country to a new place. Those feelings may begin to stabilize now and find direction.

I hope not to hold a grudge to anyone in place at the time who acted with inability. The shift in sensibility will prove as great in historical perspective as the shift between the Victorian era and the Eisenhower era. It does not reflect American incompetence that we planned or executed our response badly. We were prepared for a different era; a different century; a different millennium. Our millennium began on 9/11 and Stone’s movie begins to settle us into sobriety. From then to now was prelude: Our century and the way we will perceive things and conduct ourselves in the new century begins to stabilize with Stone’s remarkable requiem, a triumph of survival and the will to live, to act in life and to accept one’s duty in ordinary life and then to return to that ordinary life without hubris or celebration.

No more new ideas. No more ideology. No more rhetoric. No more special interests and agenda. No more novelty or management theory. We need now strength, intelligence, courage, wisdom and a steady hand.

This week on a TV talk show political analyst David Gergen was asked what he thought the Lieberman vote would hold for the Democrats. He said he thought the Democrats would return to an anti-war stance as they did in the Vietnam period and following Ned Lamont’s victory over Joe Lieberman, would chose someone like Al Gore to lead them there.

I think not for several reasons. In the next elections in 2006 and 2008, we will not go back to Gore, , Dole, Kerry or anybody. We will no longer look back. We will look forward now.

The mainstream press constantly promotes candidates they already know; the , Gore, Elizabeth Dole. Those are people suited and formed by their formative era – Gore’s new movie on the environment even follows the same path he advanced onto when he published Earth in the Balance in 1992, shortly before he was chosen for Vice President. But they are ignoring the critical moment: 9/11. We will go forward now, not backwards. And only now we are ready to go forward. In a way, the decade before 9/11 was an easy ride so long as someone from Goldman Sachs was guiding the economy. It would, at any rate, keep the economy going to its natural fate in the same direction.

There are many such steady hands among us. Prominent in this regard: Mike Bloomberg, Mayor of New York, Arnold Schwarzenegger, Governor of California and General Wesley Clark among the Democrats.

The important question is, will the political parties face the new world which fate has cast upon us in since 9/11? Will the Republicans send their ideologs packing and chose management instead? Will the Democrats? If not, Mayor Bloomberg has made it clear in private that he is willing to risk a half billion of his own money to take the center in a new Independent party featuring management and competence.

The Democrats have good options – pragmatic and competent Governors like the savvy Ed Rendell of , and Kathleen Sebelius, Governor of Kansas. We hear almost nothing about them. Instead we hear about Senator Clinton, Howard Dean and Barack Obama. Their critical moment arrived last week, when the electorate became highly motivated and especially brought into the process vast numbers of new citizens under the age of 30.

I think it is unfortunate that so many Democrats saw the Lamont victory as a celebration; an “anti-war” victory in an “anti-Bush” campaign. Only one Democrat stood out, stepped forward and saw the event as the beginning of a new political period. And for the third time this year at a critical juncture, it is the same man who has taken the initiative on behalf of the Democrats.

“Joe Lieberman’s defeat shows that the public is now engaged in politics,” wrote Wesley Clark in The Wall Street Journal the day after the Lieberman defeat.

“The Republicans will suggest that Democrats aren’t up to it. They’ll play the terrorist-threat card, hope for a few more messages of bin Laden, and ask whether an antiwar party can be trusted to keep safe. But this is just the spin. The truth is the Democratic Party—elected leaders, party regulars and the big-time donors—pretty much agree on the failures of the administration, and even on the policies that need to be adopted, like stronger diplomacy and more reliance on allies and international organizations, coupled with a willingness to fully fund, rearm, strengthen and use America’s armed forces. The primary will ensure that the Democrats push their positions—and their differences with the administration—even more forcefully.”

But right now we have a weirdly farcical thing going on in the Democratic party which has accumulated over the decades: The Democrats are like a fanciful confederation of tribes each made up of some particular idea unrelated and indifferent to the other: There is the black-issues tribe, the Israeli-influence tribe, the Taiwan-influence tribe, the Leftover-from-the-Sixties tribe, the abortion tribe, the gay marriage tribe, the anti-war Democrats tribe and a whole bunch of mini-tribes (and personality cults). The Environmentalist tribe now claims Al Gore is as shaman. Lieberman is the shaman of the Bush Democrats tribe. Most strike cords of memory of what used to mean something in the last decades of the millennium before 9/11.

None of these narrow outlooks will carry the Democrats. Many of them seem to be substituting issues in denial or avoidance of the critical problems at hand, and might be called transference issues. And there is only one critical issue today – the crises in the . A greater one lurks and is latent and will rise across the Pacific, but (to the great benefit of and ) it cannot be dealt with until this one is responsibly engaged.

And as the Democrats often seem in denial of authentic responsibilities in the , so the Republicans appear to be substituting a make-believe war of their own in denial of the rising Pacific concerns. Wasn’t that the point of the neocon darlings and Republican guiding lights Bill Kristol and Robert Kagan’s “Project for the New American Century” – Kagan, like Patty Hearst, even dressed up like a guerilla fighter for one of his earlier fantasies.

From the moment of invasion, General Clark has offered lucid analysis and enlightened geopolitical strategies to anyone who would listen.

“Republican strategists could hardly be happier with the outcome of the Democratic primary. And Democrats should be deeply concerned in the near term. But if I were a Republican, I’d recognize this as the beginning of the end. Forget about the neocons. This era is over,” wrote .

But only if the Democrats can rise to it.

There’s always Mike Bloomberg with his half billion bucks. And he’s damn good.
Posted by Bernie Quigley at 9:30 AM