Is Hillary Running for Vice President? 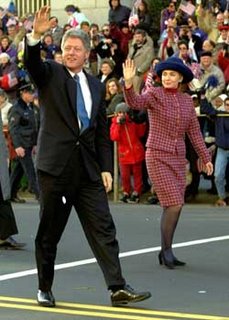 Every time I rag on Senator Clinton, a benign little voice pops up with some lite commentary, particularly if the blogs pick up my articles. This person is all over the blogs. S/he is what I think bloggers call a sock puppet. Which I think is someone who works for a politician who surfs the web and pretends to be a blogger, but is really inserting policy surreptitiously for some politician or some lobby group. They couldn’t be more obvious.

The major, influential blogs are testosterone driven, and generally the prose is as subtle in composition and delivery as Sid Vicious; a combination of angry expletives scrawled on a bathroom wall, a note passed in the hall and a rock thrown through a window. It is obvious that bloggers are men and women alike bonded by generation. In stark contrast, this other person sounds like HAL, the disembodied voice of the computer in 2001: A Space Odyssey. Sometimes the quiet, official HAL voice even tries to sound “edgy” so no one knows he is a sock puppet, but everybody knows. You can always tell because threads on a blog or forum always stop when HAL makes a comment.

Bloggers know who they are and they just walk around them and ignore them with embarrassed curiosity, like they do the 60-year-old, grey-haired ponytailed guys who bring their gig to open-mike night at the teen club. Someone should do a term paper on them. They leave a clear trail, logged and dated on blogs like the Daily Kos, the Democratic Underground and TPM Café. Bits and pieces put together over the last year or so would show clear patterns.

I get a general sense of the willies when they comment on my articles, because I know their response is inauthentic, and I am being used as a policy tool for somebody else. When I wrote an article about John Edwards last week that resonated elsewhere on the web I heard from HAL. His comments were generally fair-minded, which is always suspicious on the web (“Die yuppie scum,” I usually get.). He said Edwards, like Bill Clinton, was a fair-minded character with lasting influence and a steady hand. Which is sort of what I said about Edwards, but it is not what I think about and I certainly didn’t compare him to Bill Clinton. Indeed, one of the things I like about Edwards is that he could bring the Democrats back to the real people of the world who work for a living, and away from dilettante Nantucket Democrats like the Clintons and Kerry. But HAL’s comments hoped to cast what I had said about Edwards as being a reflection of Bill Clinton’s benevolent and paternal hand over the destiny of the Democrats, which was just the opposite of what I was saying.

Then I recalled that this same official blogger – maybe it is Hillary’s “official” blogger – a real blogger would know – had made lengthy comments on a article I wrote about Senator Clinton awhile ago which was picked up by the Daily Kos. In my article I proposed that if Senator Clinton ran for President she could well destroy the Democratic Party. Facing a candidate like John McCain, the Democrats would carry probably no states, and for the fourth time since World War II, the Republicans would win an all but unanimous victory. Another prospect is the rise of a third party with Libertarian and Independent minded voters if Hillary runs. Several movements are already afoot due specifically to her proposed candidacy, one in particular behind Mike Bloomberg, the competent and popular Mayor of New York, who has said privately that he is willing to throw half a billion bucks into a third party race. At this particular moment I’ll bet that he will. That could well spell destiny for the Democrats, as it did for the Whigs in the 1850s.

I began to put in place after reading a variety of HAL’s comments that the Cajun Cartel, James Carville and his buddy Bill, may be thinking long-term; eight, sixteen years, bringing Hillary forth as a Vice President candidate with some political innocent like John Edwards, who would just be the warm-up act before the main event, and then ending the post-war period with eight years of President Hillary. What HAL said was that the Clintons were not as bad as I said they were, and that the divisions that were caused by the Clinton Presidency and the strident chorus of his wife’s voice, heard regularly today again in the Senate; divisions which sent both the House and the Senate to the Republicans and all but turned the Democratic Party into a Clinton Personality Cult, was because the country just need time to get used to the Clintons. The country needed a little more time now for Bill to “repent” some more, said HAL, and it would all be water under the bridge. Then Hillary can be President. This is a real yearning that won’t go away for a lot of people who are just around 60 years old this year. They have a lot of money and they send it to the .

So last week when HAL praised my John Edwards article, I could see that in the background, what he might have had in mind was Vice President Hillary. An Edwards Presidency with Hillary as Vice President would give the country time to “get used” to Hillary and for Bill to “repent” (that is what he is doing at all those fundraisers for his wife), so she and Bill could run the show again sometime between 2012 and 2020.

I mean you have got to be kidding. There are two major countervailing forces in this country, and power should be gently nurtured and carefully guided between and within them, lest they fall out of alignment. The one is North/South relations – they are Logos and Eros, Particle and Wave, Yin and Yang. The one cannot dominate the other. Power must flow equitably or dangerous eruptions can occur. Current Red State/Blue State contention brings a taste of it today. And a President who holds Air Force One on the tarmac for two hours while he sits for an LA hairdresser is primarily responsible for the reemergence of those same divisions which 100 years before brought tragedy to our country.

The second countervailing force is a perennial one; the conflict between generations. The think they represent a young generation. They think they are young. They are not. They are 60. Like their pitiful English aunties, the Rolling Stones, who play at their birthday parties, they are old. And there is nothing so pitiful than old people – like HAL – trying to be young. Young people don’t like that. That could account for why Senator Clinton’s rate of approval at the Daily Kos consistently hovers around zero.

Pushing Hillary forward as Vice President, so the country can “get used to her” (say what?) so she can be President in 2012, is an attempt to dominate and territorialize the new generation coming up and preventing it from coming forward to its natural place in the world. More than anything, the represent the Generation that Wouldn‘t Go Away. It railed against the previous generation, now it digs in to prevent the new generation from coming forward and expressing itself.

Yet the somehow hold the Democrats captive. Last week it was reported that Senate Minority Leader Harry Reid was trying to offer Senator Clinton a major Senatorial post, virtually a bribe, to keep her from running for President. That’s the way they do it on The Sopranos, when a regional capo seeks a favor from Tony. But unlike Tony Soprano’s operation, with the Democrats, it is never really clear who is running the show.
Posted by Bernie Quigley at 6:24 AM


Hello friend
How are you Today Visit your Web Blog Page Got more Information you share Best Information my pray with you and Your Business get more success and Blessings in The name of LORD.