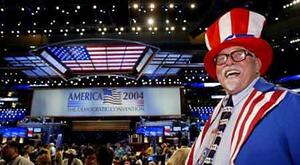 I ran into something quite remarkable the other day. A column from Reagan speechwriter Peggy Noonan suggesting a third party is about to hatch in our country. “Something's happening,” she wrote. “I have a feeling we're at some new beginning, that a big breakup's coming, and that though it isn't and will not be immediately apparent, we'll someday look back on this era as the time when a shift began.”

All her adult life, she said, people have been saying that the two-party system is ending, that the Democrats' and Republicans' control of political power in is winding down. According to the traditional critique, the two parties no longer offer the people the choice they want and deserve. Sometimes it's said they are too much alike--Tweedledum and Tweedledee. Sometimes it's said they're too polarizing--too red and too blue for a nation in which many see things through purple glasses.

What is interesting is that I found this article reprinted at a discussion forum of a political web site established by historians William Strauss and Neil Howe, authors of the book The Fourth Turning: An American Prophecy. Just after the millennium, the authors say, will enter a new era that will culminate with a crisis comparable to the American Revolution, the Civil War, the Great Depression, and World War II. The survival of the nation will almost certainly be at stake.

Then at the same time I found another story about Mike Bloomberg, the highly regarded Republican major of , who might be thinking about running for President.

Bloomberg said he was too liberal for Republicans and too conservative for Democrats. Then he added, "Running as an independent candidate would be a daunting thing.”

When Alan Greenspan left office recently he made a prediction that a third party candidate would raise a challenge in either the 2008 race or the 2012 race. Now two other very prominent Republicans are making the same suggestion.

In this environment, if the economy turns, the ship of state could entirely break up on the rocks.

These failures have occurred because of people hired to serve and give advice in government and in secondary establishments like the press. We have reached a level of incompetence not seen in government in our time.

Pundits, some of whom were the original neocon enablers, have recently compared the Bush Presidency with the Jacksonian period, when the newly empowered Southern states to the west flaunted a new populism in the face of the Whigs in the Northeast, driving them to extremes. It is an appropriate analogy. And it should be remembered that the Whigs, who bore a close similarity to the passive and effete mainstream Democrats today, were driven out of business. But in the 19th century a new party rose like a . We see that potential today as well.

That challenge could come from the division of an existing party as it did back in the mid 1800s with the rise of Lincoln and the Republicans, and there is evidence that new directions and strengths are building now in the Democratic Party. The Democrats are showing new potential with candidates like governor Mark Warner, General Wesley Clark, and Jim Webb, who recently won a primary race for Senate in . But none of these figures are conventional Democrats. Webb was a Republican and served as Secretary of the Navy under Ronald Reagan and only recently turned back to the Democrats in opposition to the incompetence and corruption of the Republican Party. General Clark likewise only entered politics in opposition to the crisis in government brought about by the Bush Administration’s incursion into . And Mark Warner is described in a prominent magazine article as the antithesis of his party; the anti-Hillary.

But will this new path gel with the Democrats? Daily we hear the most random ideas from them and a constant falling back on the old ways. And did somebody say Joe Biden? Didn’t I already not vote for him when he wanted to run for President 20 years ago? The Democrats fate could well be that of the Whigs.

A few weeks ago Dick Meyer of CBS News’ online journal outlined a nuts and bolts strategy that Bloomberg, running with General Anthony Zinni, could use to capture the White House and deliver a score of Senate seats in a new Independent Party. Support for these ideas, he said, as judged by e-mails, clicks and blog links, was overwhelming. He recently proposed a bi-partisan cabinet for a new Independent Party featuring Warren Rudman as Attorney General, Sam Nunn as Director of National Intelligence, Chuck Hagel as Secretary of Defense and Ambassador to , Zalmay Khalilzad, as Secretary of State.

“The Perot experience seemed to put an end to third-party fever,” wrote Noonan. “But I think it's coming back, I think it's going to grow, and I think the force behind it is unique in our history. This week there was a small boomlet of talk about a new internet entity called Unity '08--a small collection of party veterans including moderate Democrats (former Carter aide Hamilton Jordan) and liberal-leaning Republicans (former Ford hand Doug Bailey) trying to join together with college students and broaden the options in the 2008 election. In terms of composition, Unity seems like the Concord Coalition, the bipartisan group (Warren Rudman, Bob Kerrey) that warns against high spending and deficits.”

A third party today will only be successful if it galvanizes a new generation in American politics. That is what the Strauss and Howe book is about; ideas bonding generationally, forming an engine of history. We are at the turn of the millennium, and the Millennial Generation will bring us forward.

There is new evidence of that generation rising in the blog culture. As in the 1830s, they form their own news outlets and go their own way, abandoning in total a mainstream press mired in mediocrity, cronyism and corruption. Just this past week at the Yearly Kos event in Los Vegas, this generation reached a milestone. The Yearly Kos was a Who’s Who of new Democrats, featuring Warner and Clark, and entirely leaving behind the “machine politicians,” most notably, John Kerry and Senator Clinton (who, in spite of her $20 million bank roll from mainstream Democrats, gets a 0% approval rating in a recent Daily Kos survey).

The Strauss and Howe’s theory is wise and based on common sense. The old form their own orthodoxies and standard practices which become fixed in outmoded systems and invariably collapse. A new generation rises from the ruins and brings in a new civilization.

After Yearly Kos, Markos Moulitsas, first among equals at the Daily Kos, is suddenly sought out. He is quoted now in political perspective articles and appearing on talk shows. Recently, he has been traveling the country pitching his book, Crashing the Gate: Netroots, Grassroots, and the Rise of People-Powered Politics. He says he will write another book now about Libertarian Democrats.

What is a Libertarian Democrat? It sounds like a new political party.
Posted by Bernie Quigley at 7:10 AM